Reset the reset (3) – Walking the Walk: we need to agree a DER assessment process and a methodology to value DER which fits with a smart and flexible energy system

IGov is arguing that the Government/BEIS should initiate a process to develop a fit-for-purpose GB energy governance framework – analogous to (but not necessarily the same as) the IGov Fit-for-Purpose GB Energy Governance Framework.

Other jurisdictions around the world are already well into the process of creating a smart and flexible energy system, inter alia here. The way that different countries undertake the transformation will differ. For example, both California (CA) and New York State (NYS) in the USA – States which are avowedly pro-environment and pro-innovation for the good of their economies – are following a similar logic in that they both have similar GHG reduction targets, and they both support a move to a smart, flexible energy system as the most cost effective way to do that. However, whilst the steps they are taking towards delivering that goal are similar, the balance between market and regulation as a means to getting there is different. IGov would argue we need to learn from the processes (and the reasoning behind them) in play around the world, and capture the ‘best practice’ aspects which most suit, and fit, Britain.

Both CA and NYS state that key requirements of a move to smart and flexible energy system are (1) to know what distributed energy resources (DER) are available within their energy systems – in terms of place and time, and with respect of supply, demand side response, storage, other flexibility resources etc; and (2) to have a parallel methodology of how to value that DSR. To this end, both CA and NYS have put in place two processes: (a) a collection of the micro-detailed DER information, and (b) methodologies to value it. Moreover, in both cases, these DER related institutions / structures fit into a wider enabling environment of policies, institutions, network rules and charging and so on.

It is not that the CA and NYS methodologies are the same. The point is though that (1) they both agree that calculation of the value of DER has to take place in a context of an expected smart and flexible energy system, rather than calculating the value of DER to the current, conventionally operated energy system; and (2) to do that, it is important to fully understand the possible DER resource – and to do that, utilities have to be forced to engage through the regulatory process so that they get to know in real detail what their areas could provide, and the best way to capture it. It is not sufficient for the distribution utility to pull a number out of the air – they have to follow a process, which is checked via the Regulator, so that stakeholders can have confidence that the final resource is related to an assessment methodology. It may be that there are disagreements about that assessment methodology but even that is part of the confidence building process of understanding the DER assessment. For example, as mentioned below VoteSolar does not agree with the Californian valuation method. VoteSolar thinks it underestimates what a DER market based solution could offer, were it allowed to occur.

The DER assessments in CA are known as Distribution Resource Plans (DRP). The CPUC Scoping Note of 2014 set up DRP proceedings whereby CA utilities were required to produce a DRP. The DRPs were also to be aligned with the More Than Smart initiative (see here and here), which paints a more integrated and more market based approach than the CPUC DRP scoping note sets out.

The DRPs were then followed up with November 2016 DER Action Plans. These DER Action Plans are more explicit about finding the value of DER, and making the wholesale and retail markets more responsive to it; and more linked to California Independent System Operator (CAISO), including with storage (here and here).

There are those who consider that the process is going too quickly, and (in my words) is too threatening to the regulated, utility model; and there are those who argue that because the California model is to go through the utilities as the executors of policy, the DER resource is lower than it would be than if it followed the NY DER market approach (see below), and as such its value is lower than it should be. The same disagreements occur in NYS – there will always be those who resist change, and those who think that change is not happening fast enough. Nevertheless, CA is driving forward a process which is extremely progressive compared to that in GB.

In NYS, a similar process has been underway. IGov has been closely following NYS (see here) because their avowedly sustainable yet pro-market and innovation regulatory statements fit with the GB Government and Ofgem rhetoric. The NYS Reforming the Energy Vision kicked off in 2014, and was broadly envisaged as 10 year process. The DER assessments are known as the Distribution System Implementation Plans (DSIPs). The Market Design and Platform Technology Report set out what DSIPs are to consist of, and how to write one. The writing of the DSIP is the process which essentially forces the utility, and other stakeholders (i.e. providers of resource, customers, new entrants, the utility itself), to understand at the most detailed level what the implications are for them of being in a regulatory environment which is transforming the distribution utility environment into a distribution system provider (DSP) environment. Having understood the DER resource in an area, the DSIP was to provide confidence to the wider community that DSPs would, over the 10 year period, develop into:

Thus, assessing the DER resource and working out its value is an essential part of the transformation to a flexible and smart energy system within the NY REV.

In late 2016, the methodology for valuation of DER (VDER) was published. The difference between CA and NYS, was that the NYS was keen that the REV transition would progress relatively smoothly against a known timeline (i.e. about 10 years); and that the distribution utilities could see that their revenue would start to be affected if they did not move with the NY REV intentions towards being a DSP. Providing a sufficiently detailed DSIP was one of the expectations on them – very much a carrot and stick approach. The VDER continued this approach by explaining (1) that the current support for DER, mostly through net energy metering, would continue for a period of time; but that (2) that support for NEM (Net Energy Metering) would gradually move to a new valuation methodology of DER, which would take account of various aspects.

As with CA, there are those in NYS which think the NY REV process is too slow, and not sufficiently market-orientated enough. But, again, IGov would argue it is far more progressive, and further ahead, then GB.

As NYS attests, DER is one of the vital, inter-related whole system building blocks upon which a smart and flexible energy system rests. How much DER we expect in an energy system, and of what kind and where it is; and how we operate that system depends on the energy system institutional framework. For example, the ownership and roles of the SO; the type of distribution utility (DSO versus DSP); the type of markets we have (wholesale, local, platform etc); a flexible Codes and License regime; and the methodology used for valuing DER.

NEM is when a unit of electricity is injected into the grid after it has been produced on a domestic premises, the meter is turned back. In this way, the value for the unit of electricity is equal to the retail price of electricity. Figure 1 below sets out the practical differences of the New York REV value of DER (VDER) methodology with the conventional means of valuing DER and with the NEM payment which is the current means to encourage on-site renewables in NY.

However, as more on-site generation has been added to various distribution utilities it has become clear that a more long-term valuation of DER should occur. This valuation methodology has to fit with the whole system operation and objectives (i.e. desired outcomes, and not just technological) of energy system transformation. 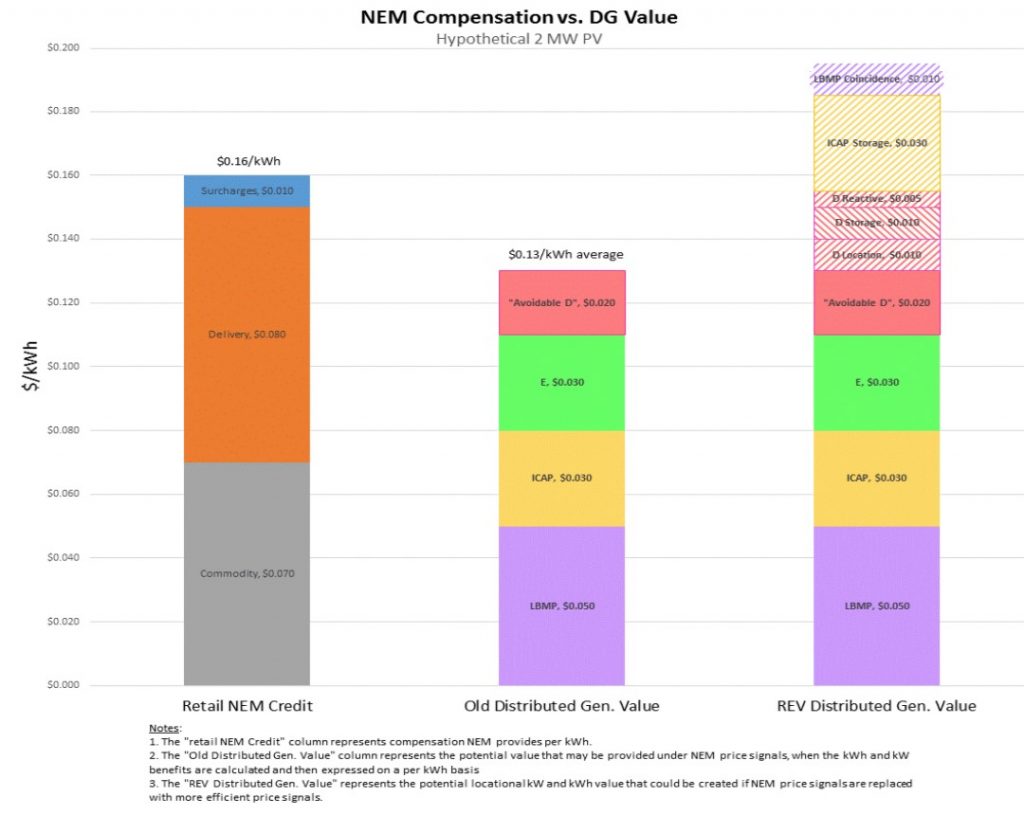 We in Britain need to go down this detailed assessment route. Ofgem should (1) look at DER valuation methodologies and processes around the world, and (2) implement a DER assessment and valuation process in GB. This is Step 2 of dragging the GB regulatory system into the 21st Century.

This has to be done, but there also needs to be a word of warning. Such a process can also be used as a way to block change, or as a means to undervalue DER. One would expect this to happen if such an assessment was undertaken in GB under the current institutional framework – as clearly set out in a recent blog on how the GB EB valuation came about. Step 1 is therefore working out the institutional framework needed to get GB to a sustainable, secure and affordable system – thereby aligning the stated aim of GB energy policy with governance which can get it there.

Transforming the energy system is hard – and we are aware it is very easy to criticise. But we need to start walking the walk – and that requires institutional reform so that we do not then undermine other necessary moves – such as assessing DER and valuing it.