New Thinking: Reset the reset (1) – we need institutional governance reform, and we need it now

Reset the reset (1) – we need institutional governance reform, and we need it now

This is the first of a series of 3 blogs, the other two are: Aligning Content with Intent – BEIS and the Regulator have to sort out their relationship and roles; and Walking the Walk: we need to agree a DER assessment process and a methodology to value DER which fits with a smart and flexible energy system.

GB energy policy is dissolving into a muddled, mire of siloed, non-joined-up policy statements and calls for evidence. GB has to decide on the necessary institutional arrangements to deliver its GHG reduction targets, cost-effective, smart, flexible, secure energy system before it makes even more costly and time-consuming mistakes.

We do not want to halt (or hinder) progress towards a sustainable energy system by undertaking a big review of GB energy policy, but we do want a clearer Government agreed institutional framework, and timeline, for taking GB’s energy policy forward – analogous to (but not necessarily the same as) the IGov Fit-for-Purpose GB Energy Governance Framework.

This has to be initiated by BEIS, even if it is another institution which undertakes it. IGov argued for a consensus building body (CBB) in its Fit-for-Purpose governance framework, which in a perfect world would be our choice to lead it. In the absence of a CBB, then BEIS should set it up. Our next best solution would be a small group of independent people to undertake it, with independent being the essential word. It should be finished in a year;  invite /take evidence on institutional and institutional interface issues; and provide transparent updates on where ideas are taking them, where they got them from,  and rationale behind decisions.

It seems to us that over the last year or two, GB momentum towards a cost-effective sustainable energy system which will meet the CCC carbon budgets is moving backwards, not forwards. This ‘one step forward, two steps back’ has tended to happen as a bi-product of another decision, which then led to unintended consequences, which then drove another decision to ‘right’ the unintended consequence, which then impacted negatively on the struggling, ‘new’ sustainable energy system stakeholders.

As an example, inter alia, as set out in the Embedded Generation Saga and Codes Governance (the unnecessary creation of a capacity market, led to unintended consequences of support for small diesel, which led to an assault on embedded benefits. This is bad enough in terms of impacts on EG (see here and here) but it is particularly depressing for two other reasons.

Firstly, because the assigned value was based on the value of the distributed energy resource (DER) in the current conventional energy system and institutions. A methodology of calculating DER value to a  ‘new’, flexible, smart energy system  should have been used. As Figure 1 below show, the New York REV methodology – which is working out the value of DER (VDER), even though the NY system is not yet smart and flexible – has ended up valuing DER higher than the conventional means of valuing DER. A reset the reset blog number 2 will focus on VDER. 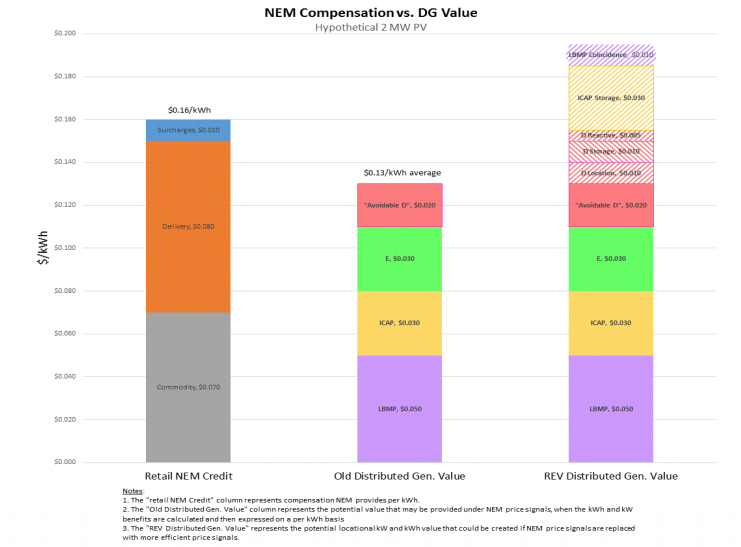 Secondly, as the EB decision shows,  the EG saga has occurred because of a lack of code governance reform, i.e. GB Institutional Energy Governance issues which have long been highlighted as in need of fundamental reform.

GB is currently going through several Calls for Evidence (CfE) on various issues (see below). For example, there is the Ofgem BEIS Call for Evidence (CfE) on a Smart Flexible Energy System; the current CfE on Future Arrangements for the System Operator: its role and Structure (and the sister CfE on the SO regulatory and incentives framework). The Regulator, Dermot Nolan, at a PRASEG meeting in London on 28 February 2017 announced Ofgem would be announcing a Strategic Code Review (SCR) on Network Charging. The NIC has just had a CfE on how to undertake a National Infrastructure Assessment – which includes energy infrastructure (for ‘smart power’), digitalisation and so on.

All these CfEs interlock, and yet decisions which pertain to them have already been taken.

For example, as  result of the ‘embedded generation’ decision, as set out above, we now have a value of EG based on methodologies for calculations which the IEA does not recommend, nor is used in ‘progressive’ energy systems such as New York or California.

With respect to the Future Arrangements for the SO. BEIS, Ofgem and National Grid have already announced that they want the System Operator to be independent but remain in National Grid Group (NGG). As our submission to the CfE said, we in IGov think that a SO within NGG will mean that it will be impossible for the SO to meet the objectives set out for it for multiple reasons. One of these is because they cannot command the respect and trust necessary to undertake, lead and deliver such a transformation of the energy system, particularly at the rate that is needed to meet the CCC budgets.  Another reason appears to be the separation of gas and electricity exactly at the time when we need to bring vectors and scales together for a whole energy system operation approach.

We therefore think a move to a partially separated SO within NGG can only be an expensive and time consuming failure, which will have to be rethought almost before it is put in place. We therefore think this decision will impact negatively on the ability of GB to move to a smart and flexible energy system – the subject of yet another CfE (BEIS and Ofgem).

Our submission to that CfE argues  that a central requirement of a smart and flexible energy system is a distribution body which is able to coordinate distribution areas so that they can integrate electricity, heat, gas and electric vehicles, as well as facilitate maximum capture of demand side response and efficient use of energy. We see an independent, integrated SO as a vital parallel institution which is needed to enable this.

The remit for the NIC infrastructure assessment excludes housing and energy efficiency.  However, having a serious roll-out of energy efficiency across buildings (including domestic housing) is probably the one most important thing Britain could do to deliver a cost effective, secure and sustainable energy system, as our submission argued.

GB has already had the bludgeoning of the solar industry – again a vital dimension of a cost effective, flexible and secure energy system because of its peak qualities. No obvious lifeline has been given to the solar industry from the latest Budget. The current Government has also returned responsibility for onshore windfarms of all sizes back to local authorities.

The sum of these decisions, the CfEs and the ‘minded to’ statements gives rise to an impression that GB energy policy is being undertaken in a random, siloed, non-strategic way – which can only cost customers more AND will mean that our decarbonisation effort is less successful than it could otherwise be.

Moreover, there is an issue galloping towards GB that we wholly unprepared to deal with. This is how to pay for networks in a world where there is increasing onsite generation, or combined onsite and storage, as is already occurring in Australia and many US States. This issue is illuminating how the conventional way of paying for networks does not work when there is more than a certain proportion of onsite generation.

The Regulator has said that there is going to be a significant code review (SCR) on network charging, and one can only hope that it deals with this issue head on. However, IGov has also already argued in its institutional framework that there needs to be code governance reform (see here and here) to overcome the view that the current code governance process is hindering change. Ofgem is already currently consulting on what to do about this following on from the Competition and Mergers Authority Report.

Network charging is a vital constituent of the economics of a smart and flexible energy system; and will shape how we transform our energy system. A central aspect of network charging is (1) how much DER we expect in the system, and of what kind, and (2) how we operate the system. These 2 points, of course, depends on the energy system institutional framework: the ownership and roles of the SO; the type of distribution utility (DSO versus DSP); the type of markets we have (wholesale, local, platform etc); and the methodology used for valuing DER. As argued above, the ‘minded to’ or recent decisions have already constrained many of these aspects, and seem likely to undermine a timely solution for network charging capable of meeting the challenges coming our way. This in turn undermines the wider issues of energy system transformation.

IGov has spent the last 4 years trying to work out a coherent, fit-for-purpose institutional framework (see here and here). All dimension of that framework – SO, distribution utilities, code bodies, data bodies, market monitor, markets, customer roles, the regulator, consensus building, the Secretary of State decision-making, the CCC advice – have to fit together. It is not that the details of each area has to be fully worked out but the fundamental institutional requirements of each dimension has to be understood so that they do fit together. They then have to be implemented so that we do not continue to take unhelpful decisions like those to do with EG or SO non-full separation.

Decisions should not be taken without serious thought of how they fit into that wider institutional framework, and the timeline for implementation. We have to stop the one step forward, two step back mentality. We would like to see the Government take this issue seriously rather than allowing GB energy policy and regulation drift. The country deserve better, as do our companies and wannabee new entrants.