New Thinking: Why is Australia becoming an interesting case study for energy reform?

Why is Australia becoming an interesting case study for energy reform?

The term ‘utility death spiral’ has seen a re-emergence recently, especially in Australia.  The term was originally coined with the new era of competition as energy markets opened up and the rising costs of some utilities meant that consumers could switch to cheaper alternatives/sources. Then, it was much more a conceptual argument – a threat – to ensure policies which did not lead to a death spiral.  A perfect storm of requirements would be needed to induce such a spiral – inflexible pricing structures, large defections and the utilities unable to change their behaviour[1].  Increasingly, the possibility of consumers generating their own power and adding in a new type of disruptive competition has added to the potential drivers for a death spiral[2].

In general though, there was a happy view that the combination  of rate design’s that the utilities were responsible for and  that consumers who had photovoltaic electricity (PV) cells on their roofs would still want to be connected to the grid, meant that this ‘death spiral’, although something to be considered and acted upon would be unlikely to happen[3].  Even in recent literature the idea of grid defection with the use of storage was seen as something that would happen in the distant future.

With the launch of Tesla’s Powerwall 2.0 onto the Australian market in December 2016 (with storage costs at a rate of $0.23 kWh[4] , and with other companies such as Enphase, GCL Poly, Sonnen and RedFlow also fighting for their place in this growing market) this comfortable view has now exploded. It is now cheaper for householders in South Australia to generate and store their own electricity (Figure 1) than it is for them to purchase it from a supplier via the grid. 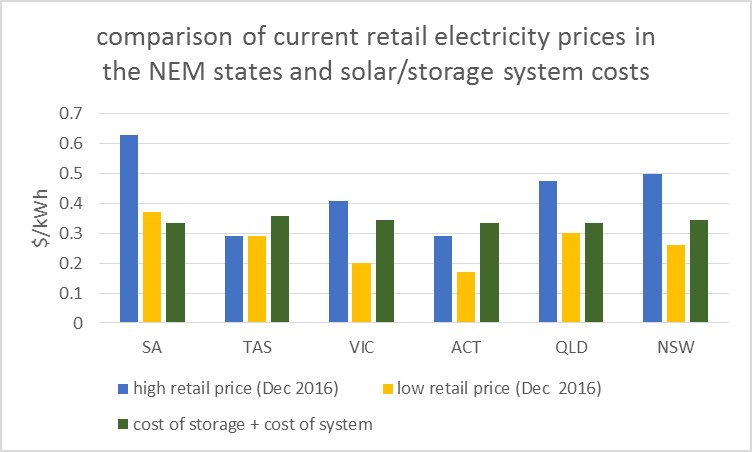 Figure 1 Cost of a solar/storage system assuming lifespan of 10 years for both (after 10 years costs drop to $0), costs for pv taken from solar choice.net.au and solar resource and household electricity use for each of the capital cities calculated for each of  the NEM states.  As it is assumed that these households would not use the grid, no allowance has been made for FiT payments.

South Australia is interesting because 30% of households already have solar pv installed, with the majority of these installed between 2010-12. At that time there were generous RFiTs of $0.44 kWh which meant that they have paid back any initial outlay in approximately 3 years[5].  The same can also be said for Queensland which has the most systems installed of any state – 27% of households. The cost of a pv/storage system again being very competitive with the retail price of electricity.  By generating and storing electricity the consumer is effectively protecting themselves against their perception of the expected volatility in the retail price of electricity. This  enables householder to budget costs more effectively.

There must be a strong likelihood as prices drop that more people add a solar / storage system.  In many ways, the question does not seem to be “will we see change?” but “how soon?”.  Moreover, it is clear that fears of death spirals and utilities being unable to pay for secure networks given customer defection has really focused minds on what needs to be done[7].  Questions remain about how incumbents will react?

In the case of Australia there are some definite positives – SA Power Networks have begun trialling a domestic storage scheme with Reposit Power, to create a virtual power plant (VPP) in Salisbury, Horizon Power in Western Australia’s Onslow power project utilizing DER, and on 23rd January the Australian Energy Market Operator (AEMO) announced its appointment of Audrey Zibelman, one of the leading players for the New York REV[8], as its new chief executive to commence in March 2017.

It remains to be seen whether Australia will have the perfect storm of requirements needed for a utility ‘death spiral’ or whether it will embrace change within its utilities and institutions to try to produce a best practice for the future governance of energy systems. If this latter were the case, it could lead to a future energy system which Australia can be proud of, and which can be at the forefront of global energy system transformation