See our latest series on postcards from Australia, so far from Sydney and Canberra

The European Commission has given State Aid clearance for capacity markets in Belgium, France, Germany, Greece, Italy and Poland, covering more than half the EU’s population. This follows Commission approval for capacity markets in Great Britain in 2014, and also in France and the Irish Single Electricity Market. The design of these most recent capacity markets differ: strategic reserves in Belgium and Germany, market-wide mechanisms (i.e. like the UK’s own capacity market) in the cases of Italy and Poland, and in France and Greece mechanisms specifically focused on demand response. These last two are of particular interest, as IGov work shows that demand response was marginalised in the development of Britain’s capacity market design.

Solarower Europe has released initial figures for solar PV installations in Europe in 2017. While Turkey has seen an explosion in growth, the EU28 managed a more sedate 6% growth on 2016, adding an installed capacity of just over 6GW. Germany was the leader amongst Member States, adding 1.75 MW, while the UK has slipped form first place in 2016 to fourth, following the scaling back of support.

German coalition deal has mixed reviews on energy and climate

The CDU/CSU alliance is on the verge of forming a new coalition government with the SPD with a new coalition treaty unveiled last week after extensive negotiations. On energy and climate the deal would commit a new coalition government to meeting Germany’s climate goals for 2030 and 2050, stepping up investment in clean energy and low carbon technologies, and appointing a special commission to explore how long term emissions targets can be met. The agreement, however, also proposes watering down the target to cut emissions by 40 percent by 2020 which Ministers suggest is unlikely to be met.

The Green Party strongly criticised the lack of commitment to the 2020 target and challenged the effectiveness of a special commission in accelerating the phase-out of coal, suggesting that the work of such as commission would be slow and does not substitute for political action. The new coalition deal will now be put to a vote of the SPD’s membership and, if backed, a government would be put in place in the coming weeks. See here for industry and NGO reactions to the coalition treaty text on energy and climate.

Time for German network operators to come clean about tariffs

Following on from a story in last week’s Global Insights on how grid constraints and costs, together with a lack of grid data, may be increasingly important issues in the German energy transition Energypost provide analysis of the opaque process for establishing network tariffs. The article highlights that annually the four German transmission system operators and almost 900 distribution network operators publish price sheets that show network fees for the upcoming year. Based on these prices energy retailers calculating tariffs for their customers.

However, beyond these headline prices there is very little information available. Neither customers nor retailers are provided with reliable information about the costs of the various networks or the total grid costs for Germany. Andreas Jahn of Regulatory Assistance Project (RAP), the author of the article, suggests that although Germany has revenue regulation of networks which incorporates a performance regulation mechanism there is a lack of transparency regarding where grid costs are incurred or how they are allocated to networks and, ultimately, customers. It is therefore unclear why some customer groups face higher network charges than others. The article suggests that although there are several justifiable reasons why transmission and distribution costs are increasing this lack of transparency undermines public confidence in the energy transition.

The United States Energy Information Administration (EIA) has published its annual Energy Outlook, which forecasts only modest increases in electricity through until 2050 and the growth in the use of both natural gas and renewables.  In the reference scenario, the EIA assume prices remain approximately the same until 2050, with a fall in generation costs but a rise in distribution and transmissions costs.  Under all scenarios there is an increase in the use of renewables, leading to 110 BkWh (billion kWh) productin by 2050 under the Low oil and gas resource and technology; 1650 BkWh in the Reference scenario and 1422 BkWh in the High oil and gas resource and technology scenario; in comparison to 690BkWh production in 2017.  94% of the renewable growth, in the reference scenario, is from solar PV and wind, with solar expected to rapidly increase in the early 2020s, due to falling technology costs. However, the solar growth rate between now and 2050, is only assumed to be 6% per year, leading to an increase from 20GW installed capacity in 2016 and 172 GW in 2050.  While the EIA note that this does not include off-grid renewables, it still seems conservative given China installed 50 GW in 2017 alone.

During the next three decades the EIA envisages a significant decline in large centralised baseload generation, with the reference case assuming no new plant nuclear additions beyond 2020, leading to a 20% decline in capacity by 2050. While coal capacity falls, from 260 GW in 2017 to between 146-216 GW by 2050 depending on the scenario.

The Edison Electricity Institute has published data on past and expected expenditure in electricity infrastructure in the United States.   Their analysis shows that over the last decade total expenditure has increased from $74 billion in 2007, to $112 billion in 2016.   However, the EEI, anticipate a rise in investment to $122.8 billion in 2007, before falling to $109 billion in 2019.  Also significant is the relative rise in expenditure on grids (transmission and distribution), which as shown in the figure now account for over half of the total capital expenditure. 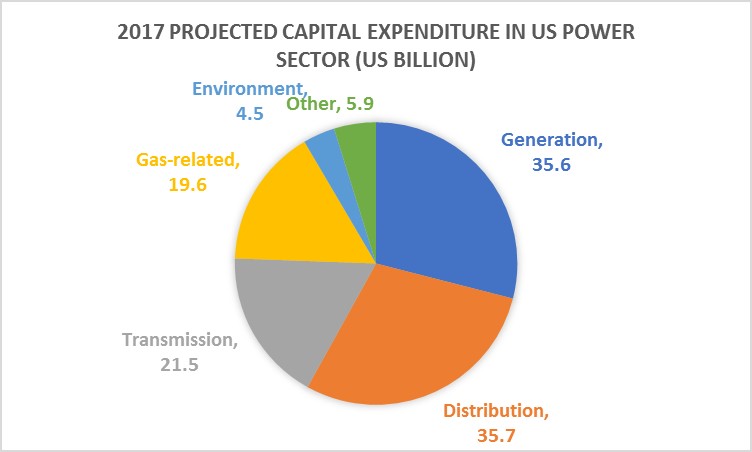 Data from the US EIA, assess that investment on transmission has risen over the last two decades from around $ 3 billion in 2006 to $21 billion.

The Institute for Energy Economics and Financial Analysis (IEEFA) has published a case study for renewable energy development in the Indian state of Tamil Nadu. The study notes that there has been a shift in the deployment of new capacity in India, with just 8GW of new thermal capacity in 2016/17 – a 60% decline over the previous years- while the deployment of renewable energy was 15.7 GW.   Crucially renewable energy projects are now becoming than conventional and those deployed in 2017 received a tariff of between RS2.43-3.00 per kWh (US$c4-5) which is lower than the average tariff paid to thermal generators.

The IEEFA forecast that Tamil Nadu can receive over half of its electricity from low carbon sources within a decade, with a doubling in the use of onshore and offshore wind (to 15 GW by 2026), while solar increases six-fold, taking utility scale PV to 12 GW along with 1.5 GW of resident and commercial level deployment.  Key to the transformation of the sector will be the reform of the distribution companies, which are currently loss making.  The is recognised as a national problem with the UDAY (Ujwal Discom Assurance Yojana) reform programme currently being implement.  This programme is seeking to reduce distribution inefficiencies and theft, create higher revenues and restructuring of debts as well as more interconnection between states.

Energy Blockchain developments in China and US

In China, the blockchain company Powerlinks, has power contracts with 50 commercial electric vehicle platforms, with over 200 000 charging stations.  However, it has now launched with partners in Germany, the US and Malaysia a decentralised smart grid ecosystem based on research labs in the four countries.  While in the US, the start-up company BlockCypher has partnered with the US Department of Energy (DoE) on a project to enable energy transactions to be settled across multiple blockchains.   This is the first time that the US DoE have developed such a project, which it hopes will enable consumers to share energy, charge their EV’s at distributed power stations and monitor and pay for their energy usage at lower cost online.