South Australia’s state premier has just announced a plan to create a network of 50,000 home solar systems backed by Tesla Powerwall batteries, in effect creating one of the world’s largest virtual power plants. The project will begin with a trial on 1,100 public housing homes which will have a 5kW PV system with a 13.5kWh Tesla Powerwall battery. Government grants will provide installations free of charge to homeowners.

German renewables growth – when is the grid ‘full’?

As a new governing coalition takes shape in Germany it appears that the ambitions of the new ‘grand coalition’ for climate protection and renewables are likely to be higher than the previous coalition. The negotiation blueprint indicates that an additional 4 GW of solar and 4 GW of wind are to be added by 2020 ‘if the grid can absorb the electricity’, but further details are so far lacking. Craig Morris reviews these ambitions and tries to identify how you can tell whether the grid can take more? He concludes that while grid constraints and the cost of grid fees are becoming more significant issues there is a lack of transparent grid data which may be limiting efforts to manage grid congestion.

Renewable Energy in the hands of the people 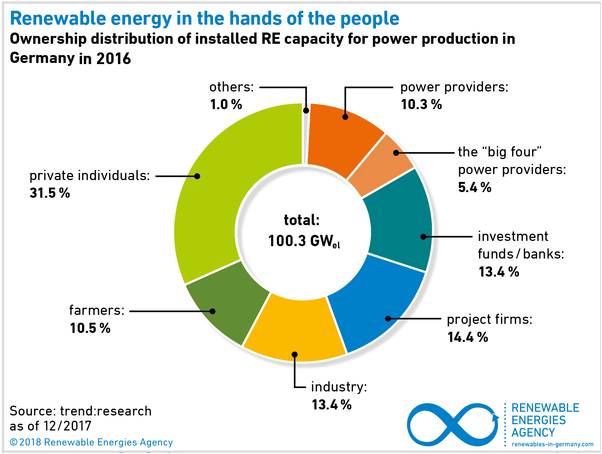 Last autumn, Spanish utility Iberdrola announced the closure of its last two coal-fired power stations, but this move was blocked by the government which claimed that coal was essential to Spain’s energy security. Now, the country’s regulator, the Comisión Nacional de Mercados y la Competencia (CNMC) has ruled that the plants should be closed, as Spain has excess capacity. However, another utility, Endesa, plans to upgrade and keep open its three coal plants (despite the fact that Endesa is owned by Italy’s Enel, which is moving fast out of fossil fuels and into renewables at home.

The EU high-level group on sustainable finance has called on European financial regulators to treat loans and mortgage finance for energy savings as lower risk. Christian Thimann, the head of sustainability at French insurer AXA, who chaired the high-level group, said: “There is no claim that everything green is necessarily less risky. But the group does make the claim that taking account of environmental and climate risk and long-term sustainability may have – and in some cases must have – a positive impact on your risk analysis”.

Last week saw the release of the second Sandbag and Agora Energiewende analysis of the state of the energy transition in the European power sector.

In terms of individual country progress Germany and the UK dominated growth in renewables, contributing 57% of growth in the past three years – Germany (35%) and the UK (22%). Despite positive growth in renewables, electricity consumption rose in every European country apart from the UK with an overall increase of 0.7% (23 TWh) in 2017. Increasing industrial production and a lack of progress in energy efficiency are largely to blame for the increase in consumption suggesting that policies to reduce demand require strengthening. The report also revealed progress on phasing out coal in Europe with three more Member States announcing coal phase-outs in 2017 (Netherlands, Italy and Portugal). They join France and the UK in committing to phase-out coal, in contrast to much of Eastern Europe where coal use is stable or growing. The debate in Germany, Europe’s largest coal and lignite consumer, is ongoing and will only be decided in 2019.

Looking more broadly, the report highlights that during the last twelve months power generation from non-hydro renewables increased significantly, with biomass up 3%, solar up 8% and wind up 19%.  In total they produced 679 TWh of electricity, which exceeded that from coal and lignite (679 TWh) for the first time – see figure 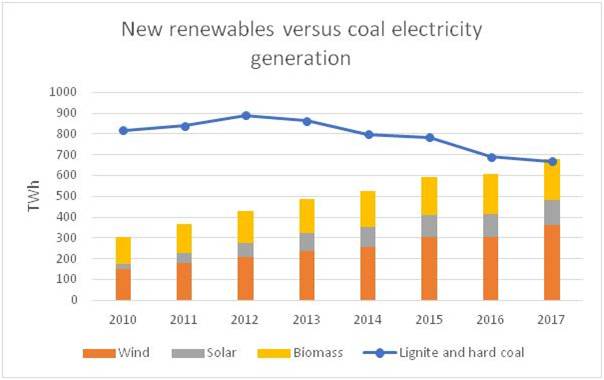 Importantly, the report also notes that the overall increase in renewables mask underlying problems in the small number of Member States of the EU that are increasing their renewable output and the relative slowdown in the deployment of solar. For 2017, across the EU only about 9 GW of solar was installed, which compares unfavourably, both to the deployment in China in 2017 which was in excess of 50 GW, and that in the EU in 2011, when 23 GW was put in place. Matthias Buck, director of European energy policy at Agora Energiewende said: “Solar deployment is surprisingly low, and needs to increase in line with the massive fall in costs”. Many countries effectively closed down support schemes for solar PV after spikes in costs in the early 2010s, and investments in solar farms on merchant terms have not yet come through on scale. However, 2017 nevertheless saw an increase in the amount of installed capacity over 2016, and according to SolarPowerEurope, a new growth phase is expected to take off very soon.

Just as China has done with Solar PV, the Chinese Government and industry is looking to dominate the global EV market.  The strategy is to develop a domestic demand and manufacturing both for the home and international markets.  It is anticipated that, as in the rest of world, the battery manufacturers will look to engage in both the transport and static (power grid) markets, further stimulating production and driving down prices.

Chinese battery manufacturers are gearing up their production to meet domestic and international demand.  The firm Contemporary Amperex Technology Ltd. is, through selling a 10% stake in its business, looking to expand production to make it the world’s largest EV battery sell manufacturer.   China’s pipeline of new battery plants is three times the rest of the world combined.

With the curtailment of electricity produced by renewable still a problem, due to bottle-necks in the Chinese grid, the Government is encouraging the deployment of storage, which will further support the development of battery production.