Home » New Thinking, News » No resource is 100% reliable: a 100% renewable energy system operation on no wind, no sun days

No resource is 100% reliable: a 100% renewable energy system operation on no wind, no sun days

A 100% renewable energy system operation on no wind, no sun days

GB is not doing well in terms of RE deployment compared to many other European countries. In 2013, the overall percentage of electricity derived from renewable sources (international basis) was 14.9% and renewable energy as a percentage of primary energy demand was 5.2% (EC target is 15% in 2020). Electricity generation from renewable resources reached 53.7 TWh in 2013.

According to (an old) WWF report Positive Energy, the available (as compared to the technical resource which is far greater) the RE resource of GB in 2030 is around 500+ TWh. Positive Energy also predicts a 425 TWh total electricity demand in its 2030 central demand scenario thereby showing that there is more renewable energy than need. Thus, in resource terms, a 100% RE system in GB would be fine. It is getting the governance – the policies, the institutions, the rules and incentives – in place to enable it to happen which is the problem.

Creating a 100% RE system will take time and requires a Government-led strategic approach, with some institutional change, but it is possible. Other countries such as Germany, Denmark, Austria and California are already demonstrating how it can be done. Various US States such as NY State are rethinking the very basics of their energy system. China is moving from simply adding capacity to rethinking its institutional and governance basis for an efficient interconnected system. GB can learn from other countries.

The changing characteristics of energy systems

As more variable (but increasingly predictable in its variability) power (ie wind and solar) is added to the energy system, the variability of electricity supply increases. Most fossil fuels and nuclear power provide power when it is called upon – although not always, as illuminated in two examples in this series: the Belgium Nuclear Winter and the US Polar Vortex. PJM in the US expects about 7% on average of the fossil fuels they call upon to not be able to provide generation.

In the past, demand for energy has been met by ‘firm’ power and the way of operating the energy system was often referred to as ‘passive’. Supply matched (or followed) energy demand, and there was no effort taken to manage that demand. As there is an increasing proportion of variable power in the mix, the way of operating the energy system has become more active in that more effort is taken to match supply and demand so that overall system costs and environmental impact are reduced.

A recent paper by Agora explains these issues in detail for the German Energiewende, and is shown in a summary figure below: 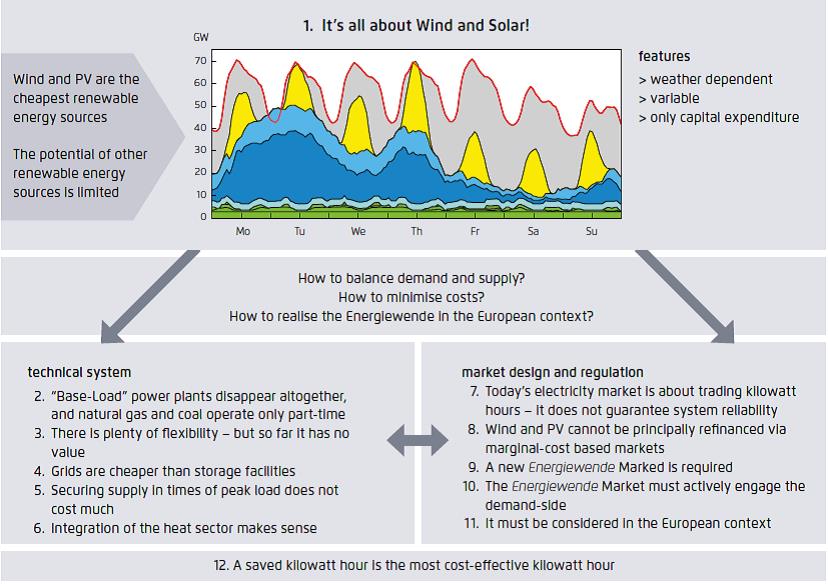 As an energy system has more variable power, such as wind and photovoltaics, there is a greater diversity in how much of the needs of the system is provided by that variable power at any one time. As shown on Tuesday and Thursday in the figure above – renewables supply most of demand. However, sometimes (Friday and Saturday) they provide a much smaller percentage of demand. The grey area is known as the residual load – and this is the load which has to be met by other resources when wind and solar energy is low.

Steps have to be taken to manage the energy system so that supply and demand match in a reliable, and cost-effective way. This is active management. As the Agora figure above shows: this has to be dealt with (1) via new technical ways of managing the system; (2) by new market design and regulation; and (3) by using less energy.

In relation to managing the energy system, this is reduce, flatten and flex. The first step is to reduce total energy use as far as possible. Having done this – ie by improving energy efficiency across GB so that total energy use falls, the demand load over a day also needs to be flattened as far as possible so that’s its peaks are reduced and so that the total capacity needed to match the peak can be reduced – thereby also reducing the cost of running the energy system. Jim Lazar and RAP produced a 10 step plan for US States to flatten their load – known as teaching the Teaching the Duck to Fly – and which can be altered to suit any country or regulatory environment:

The third step is to make the energy system more flexible – both on the demand and supply side. Energy systems are able to be more flexible because of new technologies which allow new ways of operating energy systems. These include information and communication technologies (ICT). Increasing the flexibility of an energy system can occur through increasing demand side response; by incorporating storage into the operation of the system so we don’t waste any energy produced; through valuing and better use of technological characteristics such as rapid ramping times of supply technologies etc which increase flexibility; and by increasing interconnection.

The same necessary building blocks whatever the system

Reducing, flattening and flexing are the three building blocks of a sustainable energy system. However, the very useful point about energy policy – of any description – is that the needs (the building blocks) of a secure and cost effective energy system – whether to enable a secure operation of a 100% RE system or for running the current GB energy system with 5% of energy supply from RE – are the same. All systems become more efficient and more cost effective if they move to more active management through reducing, flattening and flexing.

We need to support a diversity of RE technologies; reduce total energy use; we need to use energy more efficiently; we need to develop more flexibility into the way we operate our system; we need to increase the flexibility of the demand and supply side; and we need to become more interconnected to Europe and more integrated in GB within the various energy sectors.

As said above, we need to grasp that technologies and their costs are changing rapidly and that we have to remain flexible to those changes.

The no regret policy to that situation is the building blocks above.

An important aspect of a 100% RE system are questions related to what do we do when there is no wind and no sun? Parking for another time the question of whether this would ever occur, no wind and no sun might occur for a few seconds, a few minutes, a few hours and to some extent for a few days. This is of course no different than if fossil generation does not respond because of extreme cold or if a nuclear power plant suddenly goes down. What matters is that energy systems are developed, operated and managed to ensure reliability. As said above, the building blocks of a reliable energy system are the same whatever the constituent resources which make up that energy system: minimizing the size of the energy system; reducing the peaks; increasing flexibility via demand side response, interconnection and storage. 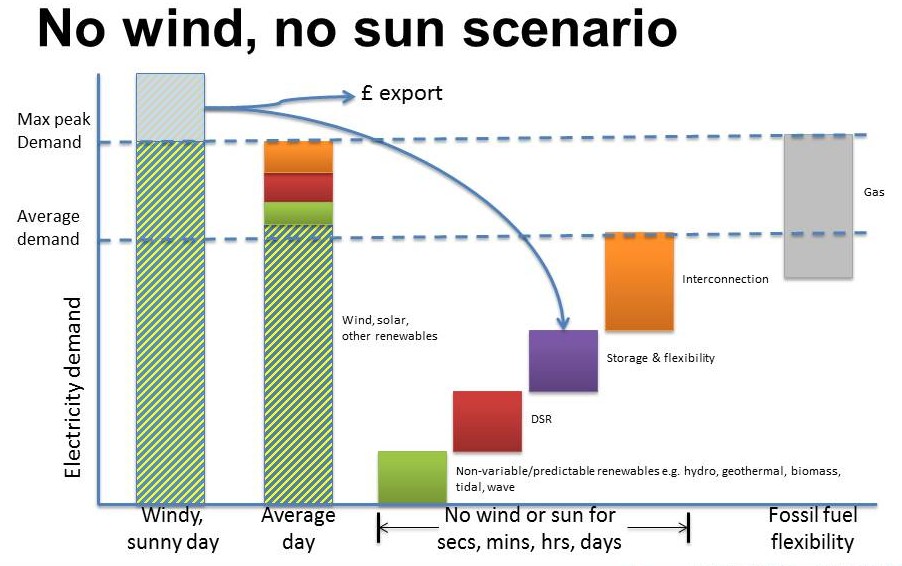 Demand side response can be used as a first response – generally as a shifter of demand from one time to another so it cannot be used permanently for days but is fine for some resource up to a few hours. Non variable renewables can continue to be used – hydro, biomass, biofuels, geothermal etc. Wave and tidal are predictable sources. The total in store can be used but then has to be topped up again. Storage covers a huge number of technologies of differing complexity which can be used in different ways to suit different needs. Interconnectors can then be accessed, and finally flexible fossil fuel resources can permanently provide resources.

How are we going to get there?

We need a GB governance shake-up to get there: policies, institutions, rules and incentives [within markets and networks to ensure more flexible, active management and operation] and a strategic framework.  We can do it but we need to operate the energy system in a completely different way and that means recognising, and enabling, the different roles for all stakeholders.

An example of what this means: new, more supportive policies for RE; new, more supportive policies for reducing total energy use; new institutions, including an independent system operator to be responsible for the ‘guiding mind’ to ensuring technical and environmental changes; mechanisms for valuing flexibility of supply; mechanisms for capturing maximum demand side response and so on.

Getting the building blocks in place requires getting the governance in place, and this is what IGov is trying to understand.

No resource is 100% reliable series:

This blog was updated on 3rd August – to provide links to the wider series.

« Previous Book Chapter: How and Why Do Policy Paradigms Change; and Does It Matter? The Case of UK Energy Policy No resource is 100% reliable: A realistic ‘what if’ model Next »