Home » News » Guest Blog: Does anyone know where the UK gets its gas from?

Guest Blog: Does anyone know where the UK gets its gas from?

Concerns around UK security of energy supply have been in the headlines recently. On BBC breakfast earlier this week, energy minister Matt Hancock suggested that shale gas exploration could resolve these security problems but also suggested that UK reliance on Russian gas is at a very low level, 1%. In this blog I aim to shed some light on where the UK’s gas actually comes from.

Firstly, it’s worth understanding that the upstream gas ‘market’ really is a murky world. It’s certainly more of a market than the oil ‘market’ (prices often controlled by managing supply)  but that’s not saying much. Overall though, it’s not a very difficult system to understand. Suppliers are responsible (through Ofgem license conditions) for ensuring that they have sourced enough gas to supply their customers but they have complete flexibility to how they actually get the gas. The supplier then works with a shipper (often in house) to ensure that the gas can get to the customers when and where it is required, through the transmission and distribution system. It really is as simple as that.

But a supplier can buy gas from lots of different people, in different places, across varying timescales. Suppliers may also source gas from their own upstream operations, Centrica/British Gas do a lot of this and they will be able to rely on this gas. For the rest of their demand, suppliers will have contracts with third parties. These may be long term or short term contracts. For example, Centrica has a 20 year agreement with a US shale gas producer which is due to start producing gas for export in 2018. Centrica is also due to start receiving gas from Russia next month through a contract signed in 2012.

But it is only these high profile contracts and stories that anyone really knows about. The gas market is a closed world, only really understood by insiders although some information can be gleaned from the (often expensive) reports produced by industry analysts. As well as bilateral deals, there are also a number of gas markets operating over a number of timescales including seasonal, monthly and day ahead. Although there is some visibility on price in these markets (if you pay for access), the identity of buyers and sellers is unknown. If on a particular day, the gas system looks as though it will be out of balance, National Grid as system operator, can buy or sell gas from the within day market in order to balance the system. Suppliers then have to pay for this gas at the market rate plus an incentive to ensure that this doesn’t happen often.

This design of the market and how it works means that it is impossible to know exactly where the UK’s gas comes from however some indicators do exist which give a fairly good idea. There are some known knowns. This map is a good place to start. It’s from DECC’s Dukes chapter on natural gas. As is the following table. 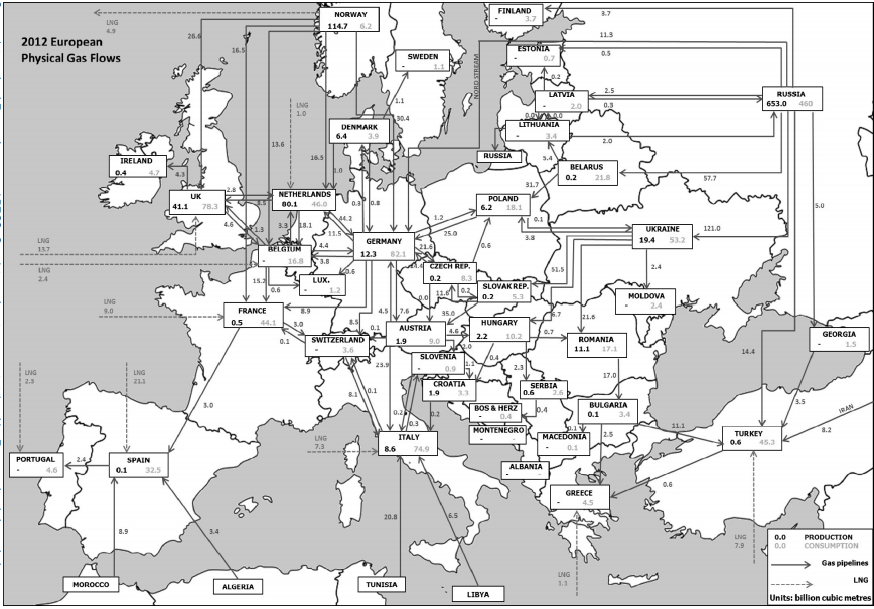 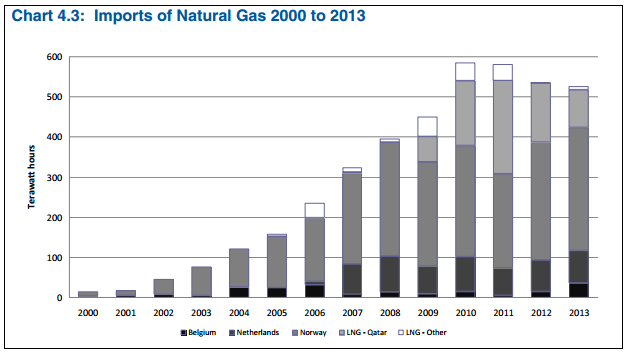 DECC’s position on this was outlined in an information release last year which suggested that because of the reasons mentioned above, physical gas imported from Russia was likely less than 1% in 2011. It may be the case that this has changed in the past couple of years but clearly, the UK is not physically reliant on Russian gas. 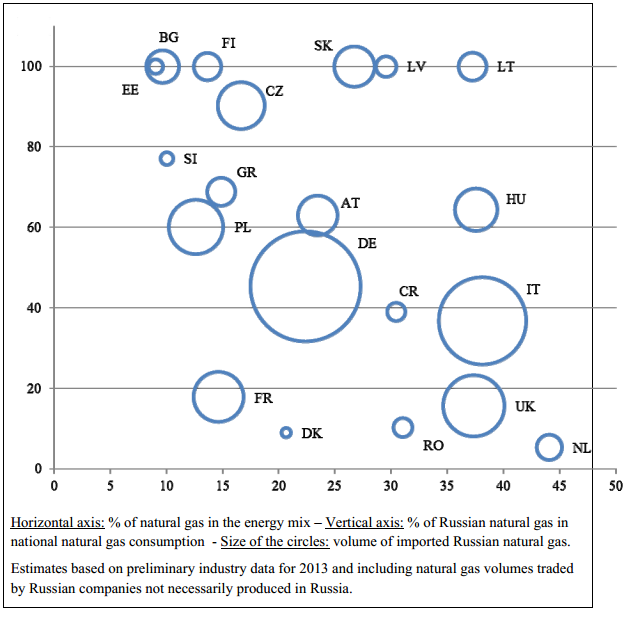 You can see that this suggests that (looking at the centre of the UK blob) around 17% of the UK’s natural gas consumption is provided by Russia, however bear in mind that this is based on gas traded by Russian companies, not necessarily produced in Russia. There are then two potential reasons for this discrepancy.

1. The UK is importing gas from Russian companies which are producing gas outside of Russia and we are importing this via LNG or from Belgium or the Netherlands.

2. British suppliers do have contracts with Russia for significant volumes of gas but Russia is sourcing this gas, on our behalf from producers outside of Russia.

It may well be a combination of both of these things however, because data on this market is not in the public domain, we can not know (yet). Clearly better clarity on where our gas comes from would be useful for all sorts of reasons. The added complexity of the fact that we do also export gas makes this issue even more complicated to understand.

In many ways, at a higher level in terms of security of supply, it doesn’t really matter where the UK’s gas comes from as we have such a huge level of import capacity for both LNG and through interconnectors that we will be able to physically source gas if Russia turned the taps off. This is less the case for other EU countries. However, the reduction in supply of gas would clearly cause an increase in prices as suppliers started buying gas from more expensive (but at least available) sources, such as LNG.

The UK is clearly a major importer of gas with 50% of our gas demand being imported. Although physically we do not get gas molecules from Russia, we are currently reliant on ‘Russian’ gas for some of our import requirements. It is impossible to understand what this volume is but there is plenty of import capacity to ensure that physical supplies from elsewhere are maintained. The key thing to consider is that if Russia stops exporting gas, wholesale gas prices would rise as a result as supplies becoming more scarce and buyers choosing more expensive sources of gas.

It’s far from a clear picture where the UK gets its gas from and although we do use some Russian gas, the majority of the UK’s gas imports come from Norway. While Russia clearly poses a security of supply risk to countries physically reliant such as Ukraine, for the UK the biggest risk caused by Russia is the potential for geo-political events to impact global gas prices.

A version of this post appeared on Gas Transition Blog on the 10th September 2014.

« Previous It is the Black Fog the Daily Mail needs to worry about, not the Green Blob Paper: Measuring and explaining policy paradigm change – the case of UK energy policy Next »