The Australian Energy Market Operator (AEMO) has issued its summer energy outlook and is expecting a hotter than average summer.   There is particular concern for the state of Victoria which has a 20% chance of not meeting the reliability standard.  Additional reserves of 930MW are being procured through the Reliability and Emergency Trader (RERT) mechanism to cover any shortfall over the National Electricity Market (NEM).  AEMO are aware that the unexpected may happen and have made plans with the wider energy industry and governments to try to ensure that load shedding can be avoided.

However, the possibility of high temperatures does not bode well for the country’s aging coal generation fleet.  In Queensland and New South Wales last week there were multiple trips as the coal plants struggled to generate power in the heat.

Two utility scale storage units in Victoria are now up and running with funding help from the Australian Renewable Energy Agency (ARENA) and the Victorian government.  The 25MW/50MWh Gannawarra storage unit is co-located with the 60MW Gannawarra Solar farm.  There are network constraints in the area and previous to the battery being installed there had been curtailment issues on windy and sunny days.  The storage will enable the farm to store excess generation and then provide power at peak times in the evening on hot days.

The second storage system has been located at a junction of four transmission lines operated by AusNet Services.  The unit will deliver critical supply, grid stability and security in a congested area of the network and has the capacity to deliver one hour of supply to 20,000 homes at peak times if needed.  The battery has shown how storage can reduce the need for expensive upgrades on the transmission lines whilst also providing essential services such as grid stabilisation, and earning revenue through trading market capacity contracts.

The US has released its 4th National Climate Assessment this week with findings suggesting that if significant action is not taken immediately the economic, social and environmental costs to the country will be substantial.  It highlights the difficulties that will be faced by already vulnerable communities, and recognises other less quantifiable costs such as the loss of habitat and wildlife, and the possible increase of tropical diseases and other health problems. The report also stresses the effects of global warming to the water supply.

The assessment covers twelve areas that will effected by global warming and identifies the urgent need for adaptation and mitigation.  A summary, overview and the full assessment are available here.

This week will see the publication of the European Commission’s draft climate strategy for 2050, and there has been a push from a number of Member States and big business to have a net-zero GHG emissions option in the vision.  According to reports, a number of large corporates, including Unliever, Allianz SE, Engie and EDF have written jointly to the EU climate commissioner Miguel Aria Cañete, urging the inclusion of net-zero within the eight options that are reported to be within the document.  At the same time, energy and environment ministers from ten Member State governments – Denmark, Finland, France, Italy, Luxembourg, the Netherlands, Portugal, Slovenia, Spain and Sweden – have also called for a ‘credible and detailed’ path towards net-zero in the strategy.

Despite high ambitions for 2050 (see above), the EU is collectively struggling to meet 2020 targets for energy efficiency and greenhouse gases, and progress on renewable energy is slowing, according to latest figures from the European Environment Agency. While the bloc remains on target to achieve 20% renewable energy by 2020, progress was slow in 2017, with the share up from 17% in 2016 to only 17.4% in 2017. Insufficient progress in raising the share of renewables in transport is the main problem. Rising transport energy use is also causing increases in overall energy use, underlining efficiency targets, and in GHG emissions. 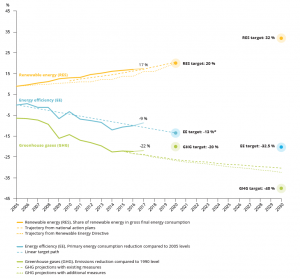 The German government will seek to postpone publication of the final report of its coal exit commission until January, according to media reports. The previous deadline was the end of this year but pressure from key lignite regions and concerns regarding the financial implications of the phase out are likely to have led to the delay.

Germany’s rail operator Deutsche Bahn has announced its intention for 80 percent of its total electricity consumption to be from renewable sources by 2030. The company’s green energy share was 44 percent in 2017.

A trial to resolve grid congestion through demand response and other sources of flexibility has started in eastern Germany. About 70 partners, including grid operators, power producers, consumers, and traders in eastern Germany, will compete to balance grid congestion on a platform separate to the wholesale electricity market. The project seeks to avoid costly grid reinforcement and is located in an area of eastern Germany where renewables already meet around 53% of electricity demand – making it a good test bed for the sorts of solutions that will be needed across Germany as wind and solar power increase.

The conclusions from Bloomberg New Energy Finance’s 2nd half of 2018 assessment of the levelized cost of electricity are that solar and wind, without subsidies, power are now the cheapest source of new power in every major economy in the world except Japan.   The BNEF assessment is that further falls in the cost of the technology over the year have meant that they are now cheaper than coal even for key consumers such as China and India.   The average global cost of onshore wind now stands at $52/MWh, with costs as low as $27/MWh in India and Texas in the US.  While solar has fallen to $60/MWh – however, some of the fall is due to the slowing of deployment in China leading to overcapacity of production.

The BNEF report also highlights the falling costs of batteries, and notes that ‘that new-build solar and wind paired with four-hour battery storage systems can already be cost competitive, without subsidy, as a source of dispatchable generation compared with new coal and new gas plants in Australia and India’.

The report is only available to subscribers, but a summary is reported by Forbes.

The investment arm of the European Union, the European Investment Bank (EIB), is one of the world’s largest financial institutions and a key funder of renewable energy.  In 2017, the EIB provided €4.4 billion for renewable energy investment worldwide and in recent years has supported projects across Asia, Africa, Latin America and Europe.