Home » New Thinking, News » Electricity Market Design 2: the ‘rules of the game’ and why they no longer work

Electricity Market Design 2: the ‘rules of the game’ and why they no longer work

Blog 2: Market Design Issues for a smart, flexible, sustainable and secure energy system: The ‘rules of the game’ and why they no longer work

As argued in the first blog, electricity market design can be considered as a social construct, representing interwoven policies and interests which not only dictate how actors perform within the electricity market, but also offer a glimpse into the historic scenario for which the design was originally proposed.

In this blog we explore several issues present in our energy system due to the current electricity market design. These issues will become more prominent if we fail to transition to an electricity market design which enables, and which does not undermine,  a cost effective, smart, secure, equitable and sustainable energy system based on an efficient use of energy with high proportions of variable renewable generation.

This blog will explore three examples of emerging issues within the current electricity market design which highlights that change is needed.

Historically the need for flexibility – the ability to “adjust generation or consumption [of electricity] to maintain a secure and reliable service to consumers” [1,2] has been of minor importance as firm powered generators can predict their output through the increasing or decreasing fuel input. Consequently, the need for flexibility on the grid in order to rectify deviations was relatively small.

Achieving our 2050 decarbonisation targets will require a complete decarbonisation of the electricity system by 2030 [3] and variable renewable generation will be paramount in  achieving this. In order to counter fluctuations in intermittent generation there is the need for more flexibility on the grid, be this from generators, interconnectors, DSR or storage.

The need for flexibility could be as much as 15GW that which we currently have on the grid if we are to transition to a high renewable future by 2030, although this is contested because of the number being directly related to the way we operate the system [1]. The more renewable and local the system the more flexibility is required – and this flexibility displaces the need for generation or network capacity. The more energy efficient the system, less capacity of any sort is required including flexibility.

The current electricity market design does not send the correct signals out to incentivise the development of sufficient flexible services as well as restricting what assets can provide flexibility (Table 1 below). This is despite the recognition from Ofgem that not only is more flexibility required and beneficial to the system, but the markets are acting as blockers as well [2,4]. 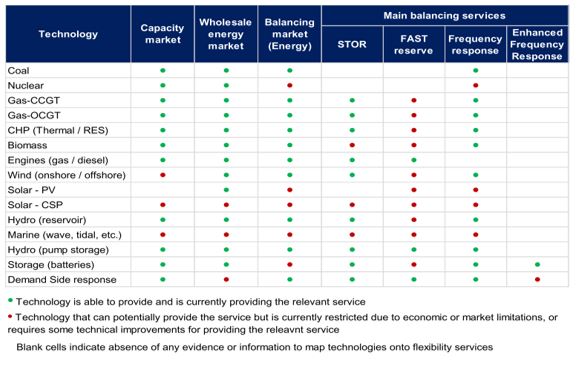 Short run marginal costs: the relevancy of fuel in the future?

The cost of electricity consists of several factors: the maintenance of the plant, decommissioning costs, and the price of fuel as the largest monetary factors. These contribute to an assets Short-Run Marginal Costs (SRMC), which the owner will aim to cover with an addition for profit.

In general, around the world, there are two fundamental types of electricity markets: pool markets and bilateral markets. The latter allow trades between buyers and sellers directly, and the ‘market’ price is revealed through the balancing market (a very small proportion of electricity actually sold).

The former has sellers bidding in their sell price and buyers bidding in buy prices – and where they clear is the ‘market’ price of that hour (or whatever time period the market clearing is set for). The marginal price for electricity is the price paid to all parties under a pay-as-clear or pool exchange.

This typically incentivises more efficient plants with lower SRMC to be employed, as it would expand their profit margins.

However, high proportions of variable renewable generation with low, or no SRMC can significantly alter the market economics under certain environmental conditions [5,6]. This is because as the sun shines or the wind blows, there is a large influx of low or zero SRMC assets coming online in a pool market. These assets are cheaper to operate and therefore when large quantities are producing electricity there is no need for the more expensive generators on the system.

This has been illustrated In Figure 1 below from a German ‘pool’ market. On the left graph we see the profile of generators stacked based on the SRMC, or ‘merit order’. As you can see at the peak the more expensive assets would set the marginal price which all less expensive assets would receive for that time period. However, the graph on the right demonstrates how this merit order is influenced by variable renewable generation and has displaced the more expensive plant and thus lowered the price for which all assets are costed. This represents a huge loss in profits for the more expensive plants and disrupts many revenue streams and investor confidence in these assets [6–8]. It is however good from the perspective of customers and for the environment.

Figure 1 Illustration of price suppression due to an increasing level of renewable energy sources (RES) on the system. As renewable generation meets the initial demand, it brings forward the mid and peak load, pushing out the more expensive generators as indicated by the dotted line on the right hand chart. Source: [5]

Such a scenario is exacerbated by governmental subsidies such as Contracts for Difference (CfD’s) and Renewable Obligation Certificates (ROC’s) which pay out to generators proportional to their generating output. These assets are incentivised to supply their generation on the grid as much as possible as a means to receiving their subsides [9,10]. As a consequence, under current market design arrangements,  this could lead to such assets offering very low prices or even engaging in negative pricing where they actually have to pay to produce electricity, as their subsidy can prop them up. For example, if they receive 2p/kWh subsidy, they can still bid in to -0.5p/kWh and receive 1.5 p/ kWh subsidy.

Figure 2 below illustrates the cost theoretical minimal cost that certain generators can operate at in order to meet their operating costs, highlighting the disparity between the fossil fuel generators and the variable generations in terms of their SRMC.

Figure 2. An illustration of the merit order, highlighting the  price that renewable generators receiving subsidies can theoretically trade at and still break even [11]

However, this also means that the low SRMC and subsidised forms of generation are also cannibalising their own revenue streams. At times of low demand and high outputs from zero to low SRMC total demand could be met by low SRMC assets thereby, under current pool market arrangements, setting a low, or even negative, price resulting in a reduction in potential revenues. With low and potential negative pricing, there are clear concerns regarding how these investment signals are likely to reduce confidence in the market [11,12].

Bilateral markets are more complicated for variable power renewables with zero / low SMRC, in that a seller has to find a buyer at a certain price (often needed to finance the project in the first place). Variable renewables also then have to make sure they do not suffer penal imbalance charges if they exist in a bilateral market. In Britain, the former issue is getting easier for variable renewables as the hold on the retail market by the Big 6 is weakened but the second issues remains. In a general sense, therefore, renewables either have to be guaranteed ‘priority’ in a market when they produce or pool markets make life easier.

Imbalance charges are the way that bilateral markets reveal a ‘market’ price. They are the cost borne to a party which does not fulfil their agreements in a bilateral contract (i.e. when a generator does not produce the electricity in a half hour that they said they would).

Within the context of the historic firm power generation fleet such a charge might make sense as these generators would deviate due to logistical errors or a technical fault and such a charge would incentivise the production of accurate generation and consumption forecasts.

However, imbalance charges further complicates the SRMC issue in an electricity market which has a goal of rapid decarbonisation as such a charge penalises variable forms of generation.

The combination of fears over capacity shortages due to the closing down of old thermal generation and expectation of unwillingness to invest in markets which have rapid decarbonisation as their goal led to proposals in the UK for a capacity mechanism in 2010, with the first auction being held in 2014 [13,14].The CM has kept fossil fuel generators online and still profitable, damaging the efforts of reducing our emissions. As will become clear in Blog 4, we do not think that a capacity market is a necessary part of market design. We consider that local markets would reveal price and incentivise new system capabilities to better suit decarbonisation and cost effectivity goals.

Recognition for the need to change: electricity market design by other academics

Many academics have proposed a new electricity market design for the UK or other markets as illustrated in Figure 3 below.

The scale of proposed changes differ between them, with some opting for smaller scale retrofits of the current electricity market design. On the other hand, some are in favour for large scale reforms to the electricity market.

Although these proposals are interesting and provide insights into solving specific issues, they do not provide a holistic re-design for the UK’s electricity market. The proposed market design in Blog 4 builds upon these proposals by offering a holistic re-design to ensure we can transition to an efficient, high variable powered renewable energy system, utilising new technologies and resources such as DSR and storage thereby rapidly reducing GHG emissions and ultimately placing consumers at the heart of the energy system.

[12]      Liebreich M. Opinion Six Design Principles for the Power Markets of the Future – A Personal View Chairman of the Advisory Board Bloomberg New Energy Finance 2017.

[13]      Lockwood M. The development of the Capacity Market for electricity in Great Britain 2017.