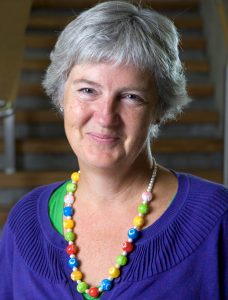 Catherine Mitchell is Professor of Energy Policy at the University of Exeter. Previous to that, she worked at the Universities of Warwick, Sussex and California, Berkeley. Her undergraduate degree was in History from London University; her Masters was in Energy and Environmental Studies from Boston University, USA and her PhD was from Sussex University in Technology and Innovation policy.

She holds an Established Career Fellowship with the EPSRC. Phase 1 (2012-2016) was Innovation and Governance for a Sustainable, Secure and Affordable Economy, and Phase 2 (2016-2019) is Innovation and Governance in Future Energy Systems. She was PI of the ESRC/EPSRC interdisciplinary research cluster into Energy Security in a Multi-Polar World (ended 2013); and was PI responsible for policy and regulation within the supply theme of UKERC Phase 1 and 2 (ended 2014).

Catherine in Chair of the Regulatory Assistance Project; a Trustee of the Centre for Sustainable Energy; and on the Board of the Energy and Climate Intelligence Unit. She was, inter alia, a member of the UK Government’s Energy Advisory Panel (1998-2003); a Member of the DTI/DEFRA/Ofgem Embedded Generation Working Group 2000-1; Member of the UK Cabinet Office’s Energy Review in 2001-2; Member, Scientific Advisory Panel, Towards a Sustainable Energy Future, Research Councils UK, 2003-2006; International Advisor to New Zealand Government Energy Review, October 2006-March 2007; a Member of the Balancing and Settlement Code Panel, 2008-2010; Chair of the BIEE, 2009-2010; on the Academic Advisory Panel to DECC for Electricity Market Reform 2010; and a member of DECC’s Distributed Generation Advisory Panel, 2012.

Catherine was a Lead Author in the IPCC’s Fifth Assessment Report in the Policy and Institutions Chapter of WG3 (published 2014), and she was also a Co-ordinating Lead Author of the Policy, Financing and Implementation Chapter of IPCC’s Special Report on Renewable Energy and Climate Change Mitigation (published 2011). She was a Lead Analyst of sub-Chapter 13 (Policy) of Chapter 11 (Renewable Energy) of the Global Energy Assessment undertaken through the International Institute for Applied Systems Analysis (IIASA) published in 2012.

She has also advised numerous national and international companies, NGOs and institutions on various aspects of the transition to a sustainable energy system.

Find out more about Catherine and her work – here.