The Australian Energy Networks Association (ENA) in conjunction with the Public Interest Advocacy Centre (PIAC) and the Alternative Technology Association (ATA) have called for a rule change to allow the networks to provide off-grid solutions to rural connections.  They state that recent trials in Western Australia have shown that using solar and battery storage with diesel generator back-up provides a more reliable, cost effective solution.  The rule change is required as networks are not allowed to provide generation or retail services, the same as the DNO’s in the UK. It will be interesting to see whether this rule change is allowed or if changing the function of the networks, such as to a Distribution System Provider, will be a preferred option.

This week saw the release of a report researching the role that energy storage could play in Australia’s energy future. As well as recognising the cost benefits of li-ion and zinc bromine batteries  and pumped hydro storage for reliability and security the report also found that battery storage could play a large part in Australia’s future economy.  Australia has vast reserves of lithium and world class research and development of storage technologies, both of which could enable energy storage start-ups and projects in the future.

The report also recognised that storage technologies could give Australia the opportunity to become a world leader in the safety and environmental issues associated with battery storage both in the domestic arena – by creating a battery storage installation standard and a waste management strategy; and in the industrial arena with the use of sustainable mining practices.

Wind development in the US – fight begins for Production Tax Credits

U.S. wind power development has been lumpy over the past couple of decades as developers have linked projects to production tax credit (PTC), which has had a two-year shelf life and has gone through a biennial ritual of expiration and renewal since 1992. That cycle was broken in 2015 when Congress extended the PTC (and the investment tax credit for solar power) by five years, on a schedule that calls for the PTC to end in 2020. Now the fight is beginning about whether it will be able to continue. The House of Representatives last Thursday passed a tax overhaul bill that slashes incentives for wind power projects, turning the focus to the Senate, which is considering its own tax reform legislation that would leave those incentives in place. As yet, it is unclear whether the friendlier Senate will prevail.

Cryptocurrencies and Energy Use

MIT Technology Review looks at cryptocurrencies – such as blockchain – with respect to their energy use.

A truck which can go from zero to 96kph (60mph) in 20 seconds while hauling a full 80,000 pound load has been given a 1 million mile guarantee. The range is 800km (500 miles) fully-laden and travelling at 60mph. Tesla could install “mega-chargers” which add 400 miles (643km) of range in 30 minutes. Those facilities will be solar-powered and Tesla will guarantee the price of recharges.

The Wall Street Journal argues that while the way energy is provided and sold is changing rapidly, regulations in the US are not keeping up.

One of the biggest ideas challenging today’s utility business model in CA is the customer choice aggregation (CCA) movement. By the end of 2017, a third or more of California’s investor-owned utility (IOU) customers will get electricity from alternative sources and/or providers and there will be 915,000 CCA customers. But that is just the beginning, according to a recent white paper from the California Public Utilities Commission (CPUC). The counties of San Diego (3.3 million) and Los Angles (10.2 million) are about to launch CCAs. The CPUC is going to hold a hearing to discuss their significance and implications for the retail market in CA. Technically, there is retail competition in CA, although in a de facto sense competition mainly occurs in the non-domestic sectors. Community Choice Aggregation (CCA) is possible when a community (and therefore domestic customers) is able, under certain rules, to procure energy for the community. Some CCAs can be large, but they are still reliant on their Investor Owned Utility (IOU) or Municipal Utility for billing etc. In GB, they would be thought of as a White Label.

Powering past coal in Europe

The Powering Past Coal initiative set up by the UK and Canada at the Bonn climate COP last week now has 27 members. It is an impressive and smart move. But within Europe, the list of countries involved shows how far there is to go to phasing out coal. Of the PPC members so far – Austria, Belgium, Denmark, Finland, France, Italy, Netherlands, Portugal, Switzerland and the UK – only Italy is still a significant user of hard coal or lignite in power generation. The heavy users are well known – Germany and Poland, followed by Spain and the Czech Republic. Along with Serbia and Bulgaria. Germany and Poland are also the big European producer countries. Of course, the PPC alliance is now targeting these countries, especially Germany. But the collapse of coalition talks there at the weekend, partly over the issue of coal use, is an indication of the political challenges ahead.

Siemens is cutting nearly 7,000 jobs – 2% of its workforce – mostly in its Power and Gas division. The layoffs, half of which are in Germany, are driven by falling demand for gas turbines. According to reports, orders are falling unexpectedly in the Middle East, especially with the decision in Saudi Arabia to switch to renewables. According to Lisa Davis of Siemen’s board, “The power generation industry is experiencing disruption of unprecedented scope and speed. With their innovative strength and rapidly expanding generation capacity, renewables are putting other forms of power generation under increasing pressure.”

2030 EU energy efficiency targets still being fought over in Parliament

Parties in the EU Parliament are still fighting over proposed energy efficiency targets for the Directive that will go into the 2030 Climate and Energy Package. Members of the Parliament’s environment committee agreed to increase the target to 40% back in September. However, amendments by right and centre-right party blocs propose reducing that back down to 30% and introducing a number of exemptions for industry. The vote will be on 28 November.

The key messages from this year’s International Energy Agency’s (IEA) World Energy Outlook report were the resurgent oil and gas production in the United States, that the costs of renewable energy is falling, the growing importance of electricity in the energy sector and that what happens in China matters globally.

On solar the report remarkably says that, “Solar is forging ahead in global power markets as it becomes the cheapest source of electricity generation in many places, including China and India.”  The report further concludes two-thirds of all investment until 2040 in global power plants will be into renewable energy.  Consequently, the installed capacity of Solar PV, is forecast to increase from 300 GW in 2016 to 2000 GW by 2040.

The IEA has significantly adjusted its forecasts for the use of coal and solar in light of current trends, as can be seen in the figure below, which compares electricity outputs from the 2007 and 2017 reports. In the decade between the two reports, the IEA have upped their forecasts for production of electricity from solar by over an order of magnitude from 161 TWh in 2007 by 2030 to 2000 TWh in the recent report.  While coal has fallen in the same time periods from 15 796 TWh to 9 880 TWh.  This is well below current consumption levels and is likely to have as significant an impact to the coal sector as the expected growth in solar will have on their supply chains. 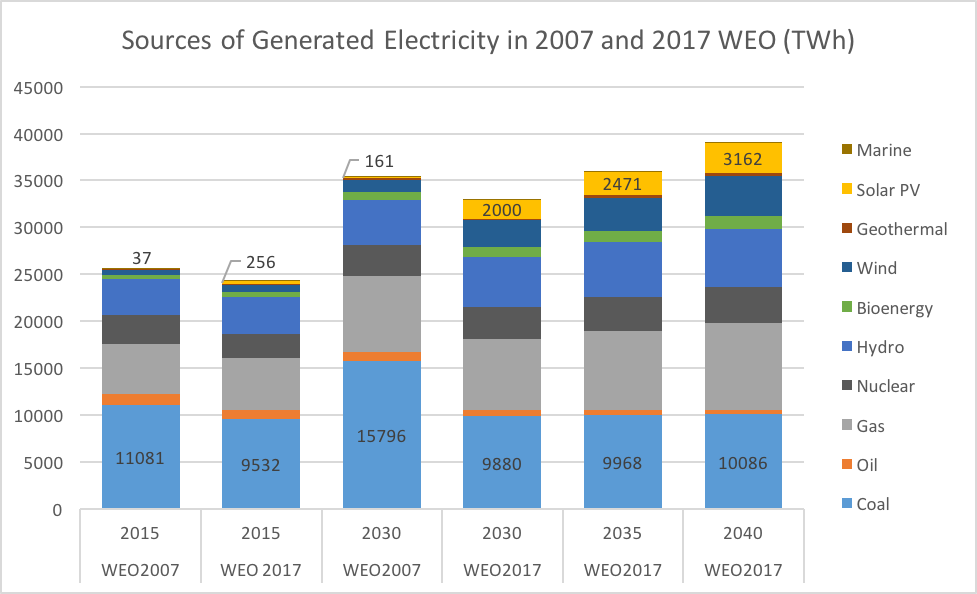 While hindsight is a wonderful thing some are critical of the IEA as they say they have consistently under-forecasted the growth in renewables, as one analyst suggests the key target date forecasts have been increased by an average of 9% each time a new report is published.  With this in mind it is worth considering what other areas the IEA might not be adequately reflecting on for the implications of new technologies, such as electric vehicles.

In the WEO the IEA forecast that by 2040, EVs will provide just 14% of the global passenger car stock, consuming 2% of total electricity (up from 0.1% today).   This is above forecasts from the oil sector – BP assume that 6% of the global fleet with by electric by 2035.  However, Bloomberg New Energy Finance suggest that by 2040 EVs will account for 33% of all vehicles on the road.   Given the impact that EVs can have both on consumption levels, and more importantly potentially on grid flexibility and costs of storage on the grid, these difference levels of deployment will be hugely significant for both the power and transport sectors.

Future Cities Catapult have released a report of strategies for smart cities.  The report studied 21 cities from various geographical locations, population size, maturity of smart city strategies and their capacity to contribute to the global strategy project.  The intention of the report is to build a knowledge base for other cities who wish to start their own smart city initiative and as a reference report for those who have already begun.