AEMO (Australian Energy Market Operator) and the ENA (Energy Networks Australia) have released a consultation paper on ‘how best to transition to a two-way grid that allows better integration of Distributed Energy Resources for the benefit of all customers’.  AEMO and the ENA have given possible frameworks for integrating DER:

Within the report the agencies recognize the value for all customers that DER could bring if given an effective framework in which to operate.  This is in comparison to poor management which would increase costs for everyone.

The Council of Australian Governments (COAG) Energy have released a Draft Detailed Design Paper for Consultation for the National Energy Guarantee (NEG).  The paper sets out how the reliability guarantee and emissions guarantee would work.  Some commentators have suggested that these guarantees would not need to be triggered as the National Energy Market (NEM) has no reliability issues to do with capacity, and emissions targets would be met by current policy.  The NEG will only become triggered should government decrease the emission element.  The emissions limits will be set by COAG Energy Council in August, expressed as an annual average emissions per MWh. The level of the allowed emissions will be key in encouraging new renewable energy, storage and demand response into the National Electricity Market (NEM).

The paper states that the Guarantee will ‘place a dual obligation on retailers to acquire a mix of resources on behalf of their customer load that allows them to in turn supply electricity that is affordable, reliable and less emissions intensive’.  It also suggests that state-based renewable energy schemes would be able to operate within the Guarantee and contribute towards emission reduction.

The flexible nature of US Energy Regulation

The Maine Public Utilities Commission has unanimously voted to review the terms for the Maine Aqua Ventus (MAV) offshore wind project, citing a significant decline in power prices since the contract was approved more than four years ago. The floating turbines were planned to be operational in 2020.  The commission pointed to some estimates that show energy prices up to 80% lower than had been anticipated when the project’s term sheet was approved. Regulatory adaptability is going to be vital as we go forward in the changing energy world and the Maine discussion raises many important issues – what does regulatory adaptability mean for longer term, non-monetary issues, such as GHG reduction?

A commentary has been published in Nature Climate Change by Alexander Barron, a former Environmental Protection Agency and congressional staffer (on the Waxman-Markey bill) who is now at Smith College. He notes that a relatively small set of models —computational general equilibrium (CGE) models, sector-specific models, or hybrids like the US Energy Information Administration (EIA)’s National Energy Modelling System (NEMS) tends to set expectations and policymaking in the US. The paper argues that there are reasons to believe those models are systematically underestimating climate change’s economic impacts and overstating the costs of mitigating it.

After lengthy negotiations between the Commission, Parliament and Council, the EU has now finally gone for a renewables target of 32% of final energy consumption by 2030, an increase on the 27% initially put forward. According to reports, the 32% target is a compromise between some of the southern European member States, such as Spain, Portugal and Italy, who wanted 35%, and others, such as Germany (see below). Agreement on the new Directive was welcomed by renewables industry bodies, such as WindEurope, but criticised as ’inadequate’, a ’spectacular failure’ and ‘far too low’ by environmental campaign groups.

Speaking at the 11th June EU Energy Council meeting Peter Altmaiser, the German energy minister,  rejected calls from a group of EU countries to increase the share of renewables to between 33 and 35 percent of the bloc’s energy mix by 2030. Altmaier said voters across Europe had lost faith in politics due in part to the ‘unachievable targets’ on renewable energy, adding that the costs for the German taxpayer had been significant. The speech has been condemned by NGOs with Germanwatch suggesting that it violates existing agreements between ministers.

Italian energy firm Enel plans to install 10-megawatt-hour batteries on Russian railways to help trains move more quickly and smoothly along the rail network. The move to create what is termed a ‘first-of-its-kind innovative storage system’ will allow the Russian rail network to accommodate bigger and faster trains without spending money on grid upgrades. The deal is believed to involve Enel (working through its advanced services division Enel X) installing a control system that will enable the monitoring of energy demand across some sections of Russia’s 27,000 miles of electrified rail network. The system will also aim to collect and store regenerative braking power.

A report by the German government has suggested that the country will miss its 2020 emissions target by 8%. Estimates suggest emission reductions will be 32%, against 1990 levels, by 2020, instead of the 40% target. The projections confirm warnings from the Environment Ministry last year and the report suggested that the government’s 2014 Climate Action Programme was insufficient to close the gap to the 2020 goal due to economic development and population growth.

In January, Germany’s two biggest political parties deferred the 40% goal, promising in a coalition agreement to agree on a package of measures that will close the gap as far as possible and reach the target at the beginning of the 2020s.

The biggest battery storage in Europe with a capacity of 48 megawatt (MW) started operation in the northern German town of Süderlügum in June. The battery can store power equivalent to the average daily consumption of 5,300 homes and was built by Dutch energy company Eneco and Japanese tech firm Mitsubishi.

On June 8th the Japanese Cabinet approved its annual report on energy,  which will adjust the country’s strategic direction until 2030.  Japan is heavily dependent on energy imports – 93% – because of its lack of fossil fuel reserves, the low level of renewable energy and the Fukushima accident curtailing the use of nuclear power.  Furthermore, Japan is not on track to meet its pledge under the Paris Agreement, to reduce its emissions by 24.4% compared to 2005 levels, as in 2016 they had fallen by just 4.6%.  Despite this,  the draft produced by the Ministry of Economy, Trade and Industry (METI), for cabinet approval is reported to keep, ‘much of the substance of the current plan intact – and  fails to send a clear-cut message as to whether or how the government wants to change the nation’s energy supply structure’.

On renewables the MITI policy report says that they will be ‘a major source of power’, which is a recognition of the rapid increase in the deployment on solar PV since the start of the decade, but it does not revise the 2030 targets for their use, currently set at 22-24% of power. This is remarkable given that there is a ‘high possibility’ that that the 2030 target of having an installed capacity of solar PV 64 GW will be met a decade early, with current installed capacity close to 50 GW.

Despite this success, Government policy remains focused on large centralised power sources.  The Fukushima accident occurred in 2011 and resulted in the suspension of operation of all the country’s nuclear power plants.  The Government currently has an ambition to restart the majority of then so that by 2030 nuclear power could provide about 20-22% of electricity – down from 30% before the accident.  However, with local opposition remaining against the restart in many places, this level of production seems highly unlikely and currently only 8 of the 55 reactors are operating. Japanese policy is also heavily reliant on coal and its expansion plan is one of the largest of any developed nation – it has started 8 in the last two years and plans another 36 in the next decade.  The revised energy strategy would see coal providing 26% of power by 2030.

The Japanese power sector is moving in different directions, on the one hand, renewables have been flourishing, with falling deployment costs and ambitious short-term deployment.   But despite this, on the medium term there are plans for the widespread deployment of large centralised and inflexible plants, such as coal.  The Japanese government should take note of international experience that is showing the accelerating deployment of renewables with the slow-down in the use of coal and nuclear power.

Last week BP published its annual Statistical Review of World Energy.   This reported that primary energy consumption increased in 2017 by 2.2%, which is up from 1.2% the previous year and the highest since 2013.  China’s energy consumption grew by 3.1%, the largest in the world for the 17th consecutive year.

Renewable energy grew by 17%, producing an additional 69 Mtoe, which is the largest ever increase in their use.  Wind power provided more than half of the additional energy and solar one third.  For the first time, BP included data on the contributions of various sources to the global power mix.   This shows that the energy source that has provided the greatest amount of additional electricity over the last decade is non-hydro renewables, generating an additional 2151 TWh of power.   Of this, 70 percent came from wind and solar.    The sector with the second largest growth was gas, followed by coal and hydro, with nuclear power and oil’s net production decreasing. 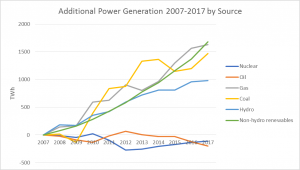