New Thinking: Spreading the opportunities of sustainable energy in Germany

Spreading the opportunities of sustainable energy in Germany

A recent presentation by the BDI (the Voice of German Industry) put forward a simple, but powerful, message in support of the German Energiewende. It argues that German industry has managed to improve its energy intensity (total primary energy supply divided by units of GDP, slide 2); described the energiewende targets from 2010-2050 (slide 3); set out what it thinks the global market potential is for products necessary to meet the energiewende’s targets, and what percentage of that global market Germany hopes to capture (slide 4, see below); and how Germany’s economy-wide adjusted, composite energy intensity metric has improved energy intensity primarily through efficiency not through economy wide structural change (slide 5, based on IEA data).

Firstly, despite the BDI having its own preferences for energy policy in Germany – which includes, for example, opposition to ‘smart retirement’ for coal power plants – it has a very clear story for how German industry can benefit from the energiewende.

Secondly, it seems to me that it is much easier for the BDI to be a co-ordinated ‘Voice of Industry’ whilst also being part of the momentum forward of Germany’s energy policy than say the CBI – the British equivalent – and GB energy policy.

The BDI exists in a country where there is strong support for an industrial policy; there is strong societal consensus in support of the energiewende and policies to improve the environment – which includes the phase out of nuclear, thereby removing major low carbon tensions not just within generating technologies but also within market and network developments and smart grid applications ; and there has been strong, simple, directed policies in support of renewables, and to a lesser extent energy efficiency measures since 1990 –  which has led to the development of vibrant German industries based on renewable energy and energy efficiency products.

BDI has had, over this time, the ability (some might say luxury) of arguing for market mechanisms in support of renewables, which fits with wider BDI policy – to a large degree knowing that more interventionist policies would continue – and it was the latter not the BDI’s own policies which has led to the current powerful German industry base and position in the world. Innovation occurs through change. If the forces within a country are able to block change, then whilst there may be short term benefits, economies (or dynamic innovation) suffer over the long term. Once a country slows dynamic innovation, there is the risk that it can flip into a negative ‘race to the bottom’, and this of course has huge social and economic implications.

Germany, however, has so far managed to establish, and maintain, a positive cycle of innovation with its 1990+ energy policies and it still has strong support for a low carbon future (here and here). However, the new factor is that Germany is trying to navigate a glide path whereby the drive for a sustainable economy is transforming into a drive where a sustainable economy equals ‘the’ economy, and in this situation there is risk of innovation being slowed more than intended. The BDI may find itself wanting to adjust the balance of its pro-market approach (which slows innovation) with policies to enable the continuing momentum of dynamic innovation.

Unlike Germany, which of course anyway has its own problems, Britain has a hopelessly conflicted energy policy between all the technology paths, and their different but necessary enabling environment to make them happen. Different parts of the energy landscape in GB, whether it be parts of DECC, the ITC or Ofgem,  carry on trying to do good things. But in the end, a credible direction has to be chosen by the Secretary of State,  and followed – and the emphasis here is on credible – a choice which is not credible is more undermining than not.  GB’s lack of credible choice makes it difficult for everyone, including industry. 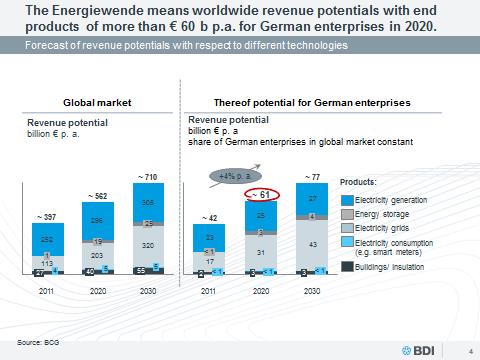