New Thinking: Putting the environment back in GB energy policy

British energy policy (and its institutions) is way too complacent about the health of the GB energy industry, and its future.

IGov argues for greater linkage between the CCC – which sets out in broad terms the GHG emission reduction needed by a certain time – and energy policy and the energy industry. It seems to us that there is a major mitigation-size gap in the current institutional framework – no one institution actually seems to take responsibility for energy practice change that will meet the challenges of climate change. Yes, GB has a climate change policy – but policies are cheap. GB needs a framework which leads to practice change capable of meeting GB goals, and it needs an institutional process to ensure that.

GB has a number of challenges that its energy system has to meet: it has to deliver a more or less 100% renewable electricity system by 2030 in order to be on track for an overall GHG emission reduction of 80% by 2050; it has to ensure its energy infrastructure enables more variable renewables and ‘smarter’ customer interactions; it has to attract investment for the low carbon resources which have to become the basis of our energy system; and it has to do this as cheaply as possible.

IGov is arguing that in order for this to occur there needs to be a more ‘directed’ framework for achieving it. This is not more regulation and less market activity – quite the opposite. It is constructing a process which delivers certain outcomes via markets – but it is a framework which delivers outcomes by certain times, and it will not necessarily suit the current incumbents.

We argue that the current institutional setting of markets and networks is not leading to the sufficient rate of change needed to meet our carbon targets. IGov thinks that the current situation of ad hoc development of this or that technology or practice is incoherent, inconsistent across (and within) DNOs, and lacking in transparency. We do not think that this will lead to a sustainable, secure and affordable energy system at low cost, never mind lowest cost.

We have developed a framework, see Figure 1 below. This argues that the advice of the Committee on Climate Change on GHG reductions by certain times has to be heeded; we have an energy policy committee (EPC) which is both advising the Secretary of State but also executing his / her policy, whilst heeding the CCC’s recommendations; we have an integrated and independent system operator (IISO) which is given responsibility to deliver system transformation and security from the EPC and Secretary of State (as Energinet in Denmark), able to meet the CCC recommendations; we have a pared back Ofgem which becomes an economic regulator only; the regulator and the IISO are on the same level of hierarchy, and work to the EPC; the IISO executes and delivers a system capable of meeting the CCC recommendations, and the economic regulator regulates it thereby taking the regulator out of policy decisions, as occurs now with Ofgem; we have a data body, which is a public resource so that new entrants are able to access data information; a market monitor; and a Codes organisation, either separate from, or part of, the IISO – but the key being that self-regulation of Codes ends; and the DNOs become a ‘generic’ DSO / DSP, which complement the system needs being executed by the IISO via bottom up optimisation.

Britain is one of the increasingly rare countries trying to deliver new nuclear power at the same time as delivering new renewables, and this is making the low carbon transformation much more difficult for GB than for countries which are basing their energy transformation on renewables, energy efficiency and gas (the norm). Whatever the rights and wrongs of GB nuclear power energy policy, ‘we’ know we may have three nuclear power plants by 2030 but we are unlikely to have more than three; and we know where they will be in GB. At the same time, we also know we may have one or two nuclear power plants, and possibly none, and GB will need to make up for that by other decarbonisation practices. Our energy policy and networks have to be ready for this. A combination of governance which is adaptable whilst also ensuring networks which are able to deliver certain outputs by different technologies / practices at a certain time is the necessary and pragmatic energy policy approach to this uncertainty.

There are those which consider this argument for a new energy policy approach as being ‘too’ directed – too much like central planning, with the implication being that the current approach is competitive and the ‘right’ one. It is of course a useful zero sum game from the point of view of those who do not want change.

IGov argues we have to break out of this intellectually dead and locked-in approach to energy policy. It seems to IGov that there is an increasing divide in GB between those, broadly the incumbents and this includes Ofgem (who think that everything is working in roughly the right direction at the right pace) and new entrants (who are patiently trying to do things despite the situation, rather than with the help of it). This does not seem to us to be helpful (or fair or least cost) in terms of the move to a sustainable, secure and affordable energy system.

IGov would argue that the current energy system is not competitive; that the value it provides via its markets and networks fits with the conventional interests that they were set up to work with 25 years ago, thereby excluding new practices which derive from new technologies and business models whether supply, demand or operation; that its network regulation and development appears reactive and lagging to whatever latest technology which comes along; and where customers wishes are not the primary concern.

Moreover, not only does IGov argue that the current GB energy policy is not competitive but the CMA has very powerfully shown how the current system suits certain incumbents to the detriment of customers. Moreover, IGov has also highlighted the inertial tendencies of current governance.

Markets and network rules are social constructs. They need to be constructed so that they provide value for the outputs and ways of doing things that public policy wants to encourage. That means that GB governance has to be able to change as economics and situations change. If they don’t change, then the rules and incentives within markets and networks simply support ‘old’ technologies and practices. If they change, but not quickly enough, they always lag technologies and social preferences. GB is getting further and further away from its social and environmental goals – and this should not be acceptable. Yet, energy policy in Britain continues to let this happen.

British energy policy (and its institutions) are way too complacent about the health of the energy industry, and its future. IGov wants a sustainable, secure and affordable energy system – and each bit of that phrase matters. Current energy policy – including its regulation – appears to us to be in some ‘Wonderland’ with respect to the necessary practice change required to meet these GB energy goals – and therefore the policies and incentives needed to enable those practice changes. The longer it takes for GB to get on to a meaningful energy policy pathway (with integral market and network policies), the more expensive, and the greater effort, it will be for customers to cut our emissions.

Not achieving our emission reductions should be unacceptable. That it seems to be of so little practical importance to the energy industry and its institutions shows how impoverished their understanding of climate change is. 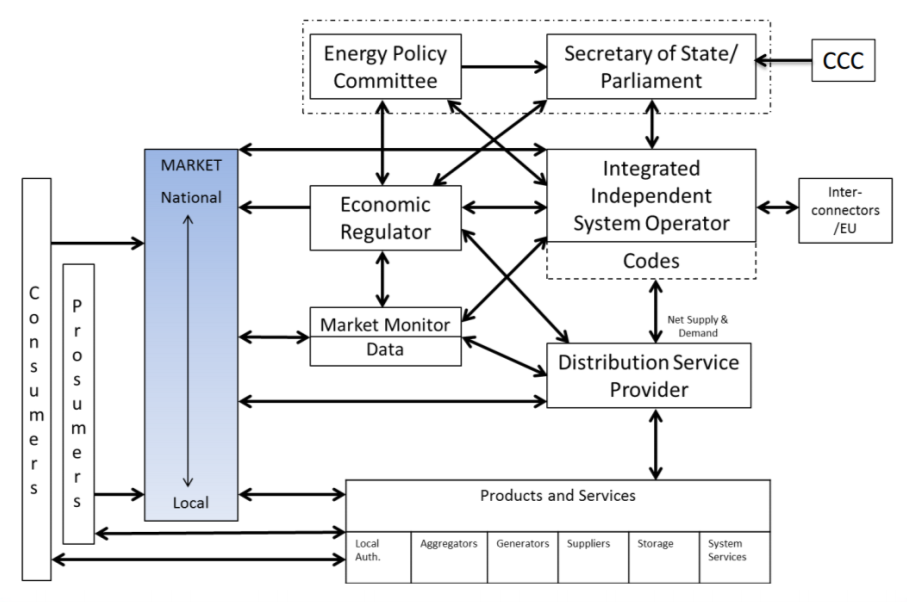