Progressive Regulation – What Future For OFGEM?

Dermot Nolan, the CEO of Ofgem,  when talking to the recent  2015 Annual Energy UK conference, set out a progressive energy vision for the future. It was a broad-ranging overview exploring the issues which the Regulator finds himself having to deal with. Importantly though, he also illuminated just how much we are all in this together.  Long term solutions for a legitimate, sustainable energy system have to be bought into by all stakeholders. His final comment was: ‘I invite all of you in the industry, consumer groups and the government to help us achieve that common goal’. Given how hard Ofgem has fought to keep itself separate from industry and Government over the last couple of decades this is a great step forward.

Nolan’s speech argued that technologies are changing – and much quicker than expected. He gave PV as an example, and challenged the DNOs, in particular Western Power Distribution, to come up with better solutions to prepare for, and adapt to, a wider range of future scenarios. He highlighted how storage could fundamentally change the energy system as we know it, and rapidly. He explained how a combination of new technologies, including storage and electric vehicles, could alter the balance between distribution and transmission networks. Not for profit local authorities are entering the energy space, beginning to alter supply. He also gave clear notice of what he wanted and what he would do: he wants companies to innovate and provide new services which are in the interests of consumers and which will make the system work better; he would make sure no consumers are left behind and that everyone benefits in tomorrow’s market;  because major change is around the corner , Ofgem has to change too and be agile enough to enable, rather than undermine, it; and finally, he brought these points together and asked ‘what is the role of customers, suppliers and regulation’ in this?

This is a welcome, progressive review from the Regulator, and even better because it was given to the annual conference of the conventional energy industry.

Two minor comments are (1) with respect to Principle Based Regulation (PRB).  Nolan said he wanted to move beyond tick-boxing to meeting the spirit of the law of regulation – something IGov has been arguing for in our straw-model of a new governance system (here, page 5; and here). However, IGov argues that PRB (which we support in general) should be toughened to become Output Based Regulation so that regulation is set up to achieve certain outcomes, rather than just follow the principles.

The second point (2) is with respect to smart meters. Nolan argued that SM’s would be the most significant and most visible example of innovation in energy in the lives of customers. In some sense, that’s right. They are an important enabler certainly, including of the smart grid. In a binary world, customers either carry on as normal (and therefore a SM does not do anything very positive for them or the network) or they become more connected in some way to their energy use (and smart meters obviously allows them to do all sorts of things that they would not otherwise be able to do, and allows other actors to do different things as well – ie potentially aggregators, distribution service providers and so on which maybe they are less aware of).  Understanding (and keeping track of) the rise in services as a result of SMs is one way to judge innovation. However, customers who do opt in to new ways of doing things have to do so with the help of others – whether local authorities or communities, pv installers, a new supplier and so on, and smart meters may not loom very large in this change from the customers perspective.

Ofgem has improved its progressive credentials over the last year with the publication of the Non Traditional Business Model (NTBM) report. But this talk took the open approach of NTBM one step forward.

IGov is developing a new governance structure  (Output Based Regulation) suitable for the changing energy system that Dermot Nolan described.

In this model, its latest iteration shown below, we are trying to stimulate a debate about how transformation of the energy system should, and could, be more legitimate: both in terms of how the energy policy decision making process occurs at the high level of Government in DECC, but also once an energy policy decision has been made, how it can be executed in a more directed, and agile, way.

Ofgem’s role is obviously central to this. In the figure below, the arrows signify relationships set out in Strategy and Policy Statements (SPS). We have altered Ofgem’s role to become an economic regulator. This gets rid of all the non-economic areas that Ofgem is currently responsible for. In this way, the economic regulator feeds in economic analyses to an energy policy committee (EPC) which is both the executive of policy, but also the place where potential policies are discussed in depth by stakeholders before the EPC advises the Minister, who takes the decision.

The economic regulator would continue to regulate some energy system institutions. These system institutions are likely to be different from those in place today. For example, if there was a state-owned not for profit integrated independent system operator (IISO), then regulation of the transmission operator (TO) would be different. If DNOs become transformed into distribution service providers (like those in NY), a new form of regulation would be required. In our model, the Minister decides a policy; the EPC executes it and the IISO is responsible for the technical transformation and security issues of that policy. The IISO decides what network and market requirements are needed for that technical transformation and the economic regulator then regulates for that technical transformation.

Setting up the EPC in a legitimate manner, and establishing its role, will take time. However, it seems to me that Dermot Nolan’s Energy UK talk and his invitation to others to become involved in discussions about how to move the energy system forward is along the right lines for an EPC. The EPC is a new institution – which we have begun to sketch out elsewhere.  It has to be working towards fulfilling all the energy policy goals – environmental, security, social and economic. It cannot be biased towards one of them. One reasonably simple idea is that Ofgem is separated into an economic regulator, and some of their staff move to become the basis of an EPC. However, one concern of the EPC growing out of Ofgem is that the economic culture of Ofgem would remain dominant – which would not be a good idea. Active steps would be needed to ensure that this did not happen.

In the end, this is likely to be semantics. We need an EPC, whose role is legitimised via a visionary SPS. That EPC has to be staffed, and one idea is that it is led by Commissioners. The best we can do is to ensure that those who work for, and run, the EPC buy in to its Vision as an executor of an inclusive, transparent, enabler of a legitimate decision-making process for energy.

Institutional change is obviously disruptive to governance. But as said elsewhere, because of the rapid energy system change, governance change does have to happen (both institutional and regulatory). Undertaking no change is not an option; a fudge (whilst classically British) would also be unhelpful. Now is the time to discuss the basis of future GB governance to achieve consensus across all stakeholders – whilst making sure that the hard decisions that have to be made, and which will be unpopular with those most affected, are still taken. 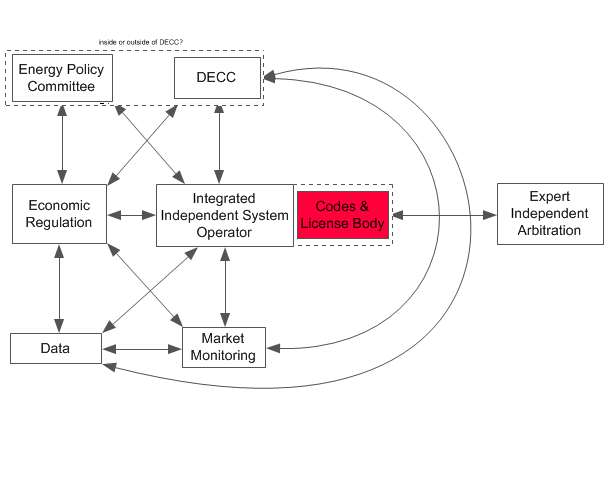