The New South Wales (NSW) government launched its Emerging Energy program last week.  The program will invest $55m on large-scale energy projects to improve the diversity of NSW energy mix.  In the next 15 years 10GW of coal generation in the state will be at the end of its life.  The program is designed to help replace the coal plants with large-scale, low emission, dispatchable generation.  There is funding of up to $10m per capital project and $500,000 for feasibility assessments.  The projects must demonstrate ‘ ‘system operational’ technology readiness and commercial readiness from ‘small-scale trial’ to ‘market development’, in accordance with Australian Renewable Energy Agency definitions’.  It is hoped that by supporting emerging technologies in this way NSW can help drive down the costs of emerging technologies in the country and create a significant number of jobs for regional NSW.

A report by the Australia Institute has stated that average wholesale prices have peaked in the National Electricity Market (NEM).  It also states that the continuing growth of the renewables sector should put a continuing downward pressure on prices.  The rapid increase in wind and solar generation has meant that over 23% of Australia’s grid generation was met by renewables.  Unfortunately other sectors such as transport, agriculture and waste have seen their emissions rise which has meant that Australia’s emissions rose by 1.3% last year.

The Energy Web Foundation, a blockchain organisation based in Zug, Switzerland has announced a collaboration with a subsidiary of the US power grid operator PJM, in which the former’s Energy Web Origin open-source blockchain tool for renewable energy and carbon markets will be piloted in the PJM renewable energy certificate market. The scheme will run up until November 2019 to develop the tool in a real-life environment.

The electrification of personal transport across Europe is an uneven process. Latest figures show that the plug-in market, comprising pure battery electric vehicles (BEVs) and plug-in hybrids (PHEVs) grew by only 1% year-on-year in September 2018. While EVs have grown at impressive rates in recent years, this has been from a very low base, and the market share for new vehicles stands at just over 2%. However, September’s figures have been skewed by a recent rush to buy PHEVs ahead of a change in vehicle standards which has now ended. BEV sales are up by a much more healthy 27% on 2017. CleanTechnica has a useful round-up of EV policies across the main European markets, and it is a mixed picture, with Norway and the Netherlands showing leadership, but the automotive manufacturing industry in Germany resisting stricter emissions standards.

The last two weeks have seen the German Federal Government coalition parties suffer significant loses in state elections in Bavaria and Hesse. In both states the CSU/CDU and SPD experienced dramatic loses to both the Green Party and the far-right Alternative für Deutschland (AfD) party.  The results are widely seen to reflect voter frustration with squabbling within the coalition government including disagreements between the CDU and CSU over how to deal with migration and the far-right AfD party. The results of the state elections has led to renewed calls for the SPD to exit the governing Federal Coalition, a move which would almost certainly lead to a snap election. The state elections also played an important role in prompting Angela Merkel to announce that she will not be standing as party leader at the CDU conference in December or seeking another term as chancellor at Germany’s next federal elections, due in 2021.

The domination of the Federal government agenda by migration and internal politics have led to claims that insufficient attention is being paid to climate and energy policy. In particular ongoing uncertainty has been highlighted as making it harder to implement the German coal exit commission plans which are due by the end of the year. Despite these national concerns the incoming coalition state government in Bavaria has indicated it plans to develop a state climate protection law which will include a specific target to reduce greenhouse gas emissions to under two tonnes per citizen annually by 2050. The coalition emphasised that they see a highly regional and decentralised energy supply ‘as a great opportunity for local value creation’.

Germany’s CO2 emissions are on track for their largest drop since the 2009 recession this year, according to estimates by energy market research group AG Energiebilanzen (AGEB). So far this year approximately 7% of CO2 emissions reductions have been driven by strong renewable power production and warm temperatures.  AGEB forecast that over the full year emissions will drop by 5% despite solid economic growth and a population increase. However some industry experts warn that the reductions were largely due to one-off effects such as warm weather and did not indicate that emissions reductions would be sustained in the future.

Reductions in CO2 from US Electricity Sector

It is often suggested that the development of fracking in the United States has been a major driver of CO2 emissions reduction, as the resultant lower gas prices have led to a reduction in the use of coal.   While this trend has occurred, figures from the US Energy Information Administration (EIA) shows that this trend is not the sole or even the major reason for the slowdown in the emissions intensity of the US power sector.

Rather, U.S. electricity demand has decreased in 6 of the past 10 years, as industrial demand has declined, and residential and commercial demand has remained relatively flat. If electricity demand had continued to increase at the average rate from 1996 to 2005 (1.9% per year) instead of its actual average rate of -0.1% per year, U.S. power sector CO2 emissions in 2017 would have been about 654 Mt more than actual 2017 levels. If the mix of fuels used to generate electricity had also stayed the same since 2005, U.S. power sector CO2 emissions would have been another 645 Mt higher in 2017.

Between 2005 and 2017, CO2 emissions declined by a cumulative 3,855 Mt as a result of a switch from coal to gas and the rise of renewable energy of which 2,360 Mt can be attributed to the shift in fossil fuels (mainly coal, but some oil) to natural gas, and 1,494 Mt can be attributed to the increase in solar and wind.  However, the importance of renewable energy has grown significantly during this period and the contribution of solar and wind has risen from 0.5 % in 2005 to 8.3% in 2017, as can be seen in the figure.  As a consequence, in 2017, the additional contribution, compared to 2005, of solar and wind to reduced CO2 was 266 Mt compared to 348 Mt from switch from coal to gas.

Therefore, the combined contribution of energy efficiency and renewables in 2017, compared to 2005, to decarbonisation of the US power sector was more than 2.5 times larger than the switch from coal to gas. 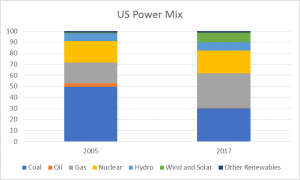 According to the International Renewable Energy Agency (IRENA), in a new report, by 2016, about 133 million people were served by off-grid renewables, with about 2.1 million people connected to solar photovoltaic (PV) mini-grids. Between 2008 and 2016, the number of people connected to mini-grids tripled to nearly 9 million across Asia and grew six-fold to 1.3 million across Africa.

However, with more than 1.3 billion people still lacking modern electricity services, the use of min-grids should increase significantly in order to improve energy services.  It is estimated that between 2016 and 2030, renewable energy sources will power around 60% of new access connections, of which approximately 40% will be through mini-grids. The IRENA report highlights the policies and regulation that can aid this development and have categorised them as: