A project is currently being undertaken by the Victorian government, with funding provided by the Australian Renewable Energy Agency (ARENA) and in conjunction with the Commonwealth Scientific and Industrial Research Organisation (CSIRO) and the Smart Energy Council, to create a comparative battery register. Australia is expecting a surge in the number of small scale battery installations to complement the almost 2 million household who currently have solar PV installed.  The register will enable householders and businesses to compare storage brands in terms of cycles, depth of discharge, and kilowatt through-put rating.  This will give the householders a better understanding of which type and brand of storage will better suit their needs.

The Australian Energy Market Commission (AEMC) have made a final rule this week giving the Australian Energy Regulator (AER) the responsibility of calculating the value of customer reliability.  The AER will assess the cost of keeping the lights on for all customers and how much customers are willing to pay for this.  The sliding scale will enable the Australian Market Operator (AEMO) and the Reliability Panel to calculate the cost parameters when designing and regulating network infrastructure.

Scott Pruitt the head of the Environmental Protection Agency (EPA) has resigned following months of scandal, both political and ethical.  During his time in office Pruitt has made more than 20 deregulatory changes and attempted to push back many of the Obama administrations energy policies including the Clean Power Plan, Clean Water Rule and the methane standards for oil and gas industries.  The deregulatory changes made have been criticised for their lack of legal substance and this year the courts vetoed Pruitt’s attempt to suspend the Methane Rule.  Pruitt has also been at the centre of an expenses scandal and has faced 13 federal investigations over these controversies.

Pruitt is to be replaced by Deputy Administrator Andrew Wheeler, a former coal lobbyist and climate change denier.

Record breaking renewables output in first half of 2018 – Germany

Renewable energy output in Germany continues to beat records providing 41.5% of the country’s power supply in the first half of 2018. The total net output from renewables in the first six months of 2018 was 113 terawatt hours (TWh), 9% higher than the same period the previous year. Output has been supported by strong winds in the early part of the year and particularly sunny weather since April. But the good news comes as experts warn that climate and energy policy are being marginalised in German politics as the Coalition quarrels over migration policy.

Energy ministers in German states come together on Energiewende approach

Although many organisations are suggesting that climate policy is currently marginalised at the national level in German politics the federal states continue to work more closely with the energy ministers of the 16 states agreeing to improve coordination between state ministries and seek to separate energy policy decisions from party politics. The agreement  highlights that the Energiewende is ‘so important’ it should not be dominated by day-to-day party conflicts and comes as the German Renewable Energy Agency publishes (in German) its 2018 renewable status reports for the 16 federal states including a review of Energiewende concepts, best practice and renewables deployment.

The Danish government has just signed a new energy agreement, to replace the previous one developed in 2012 and set to run out in 2020. The new agreement, supported by all the political parties in the Danish parliament, looks ahead to 2030. A central goal is that electricity consumption should be 100% renewable by 2030, and 55% of total energy consumption. Beyond targets, the agreement also lays out budgets and capacity auction plans for more offshore wind and energy efficiency measures, as well as a reduction on taxes on electricity (to incentivise a switch away from petrol and diesel in cars). At the same time that it promotes offshore wind development, the agreement seeks to reduce the number of inshore wind turbines.

The French government has unveiled a series of measures to accelerate investment in solar PV. In exchange for streamlined planning rules, a number of large retail groups, the French military and state railway group SNCF have committed to put PV panels on their sites across France over the next 7 years. The plan also involves increased financial support for solar thermal from next year. Local government is also being encouraged to carry out assessments of potential for solar PV generation on roofs within their areas. The plan has been broadly welcomed, but according to Daniel Bour, president of the French solar association Enerplan, ‘the devil will be in the details.’

Beginnings of a turn from coal to renewables in Poland?

There are signs that Poland, one of the EU’s biggest coal users, is cautiously embracing renewables to improve the security of its energy supply and meet European Union targets. At the end of June the country’s upper house of parliament approved the removal of clean power investment roadblocks within a new renewable energy law aimed at putting Poland back on track to meet its EU commitment of 15 percent renewables by 2020. Under the Law and Justice government, a hostile policy on onshore wind had been adopted, with pledges to support the coal industry. The turnabout seems to have been partly due to pressure from other EU members, many of whom have now met their 2020 targets, and also partly because to reduce dependence on Russia for energy. Poland is also developing a gas import link from Norway and intends not to renew its contract with Gazprom after 2020.

The Chinese Belt and Road initiative was launched by Xi Jinping in 2013 and is a strategy to build up trade links and infrastructure from China across Asia Pacific and into Central and Eastern Europe and is a high priority for the Chinese Government.   The initiative is developing both land and sea corridors to enhance co-operation and includes large scale energy and transport infrastructure projects. 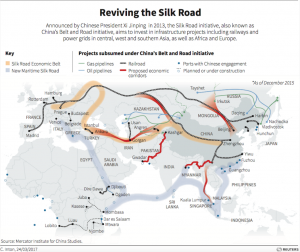 In the electricity sector the initiative is supported by Global Energy Interconnection Development and Cooperation Organization (GEIDCO).  This is an ambitious body whose objective is to create a global grid, to enable the large-scale movement of, primarily, renewable electricity between regions.  It is headed by Liu Zheny (who is President of State Grid of China), but also has on its board, Steven Chu (the former US Secretary of State for Energy) and Masayoshi Son (the Chairman of Softbank Corporation in Japan).  The initiative has detractors, who point to the growth of and need to maintain the focus on the development of decentralised energy, but also supporters, such as Jeffrey Sachs, who claim that ‘It is a strategy fit for the unprecedented scale of the energy transformation facing our generation’.

Within the global initiative are regional proposals, such as a call for greater connectivity between China and the Middle East and enhanced grid connections across the region and for the development of an Asian Super-grid linking Japan, South Korea, and Russia.

As the percentage of renewable energy in any country or region rises, so does the need for greater system flexibility. Interconnectors and the movement of electricity from a country of high production to one of high demand, is potentially one such option.  However, the extent to which interconnectors will slow the deployment of other national or decentralised flexibility mechanisms, such as storage or demand side measures, needs to be considered.