Home » New Thinking, News » Comparing NYS with CA: Blog 6- DSO or DSP – why it is the function rather than the name that really matters

Comparing NYS with CA: Blog 6- DSO or DSP – why it is the function rather than the name that really matters

Comparing NYS with CA: Blog 6 – DSO or DSP – why it is the function rather than the name that really matters

As described in the last blog, both CA and NYS have instituted a regulated process to reveal their DER resource and value. In both cases, they have required distribution utilities to undertake distribution resource plans, and have given them a couple of years to complete them. It seems to IGov that the GB Regulator should require the GB distribution utilities to undertake a similar, regulated process for their areas for two important reasons:

Why the name and function matters

What really matters is not so much the name but what the function of the different acronyms is meant to encompass, and how they are regulated. This is because distribution functions can vary enormously and have huge implications for energy system development – including choice, and cost, for customers.

In general, fairly or unfairly, the standard distribution utility or DNO tends to be viewed as a conservative, passive, low risk investment which makes their money broadly from a rate of return on their asset base, and to a lesser degree from a distribution charge per unit of energy which passes across their wires. Their financial interest, again stated in a rather bald way, was perceived to be adding capital assets and selling units. This has led to charges of ‘gold-plating’ by distribution utilities – adding unnecessary assets, paid for by customers, in order that they make a greater return. Thus, in general – even without gold plating – their preference – in the absence of any performance based incentives – is to add capital to the assets rather than to encourage reduced demand or load shifting which should, all things being equal, reduce the need for infrastructure expenditure. In GB, the regulatory basis has changed from RPI-X to RIIO to try to counter this – albeit with limited success.

The distribution system operator (DSO) is a slightly more ‘active’ DNO which stimulates some non-wire system operation functions and markets – usually to do with ancillary services, reactive power etc. In terms of change, a move from a DNO to a DSO combined with a similar (cost of service) type of regulation is often the preferred option of the incumbent DNOs – because it is very little different from what they do now. It is also often the preference of incumbent generators. It is the move to a flexible, co-ordinated distributed energy system – best for customer choice and cost – which most threatens the stakeholders which benefit most out of the current, inflexible, supply orientated system. Those stakeholders, which fear for their revenues in a more flexible system, can be expected to either (at best) be wary of changes or (worse)resist changes to the DNO – and in light of this, their preference tends to be change to a DSO than a DSP (discussed below).

The DSPs, (NYS and IGov), while they have different names both basically encompass a similar, new function intended to coordinate the area system operation and to stimulate markets. In both cases, they also support a complementary performance based regulation to incentivize the desired DSP function.

In NYS, as discussed in Blog 2, the DSP is incentivized in such a way that it incentivises new behaviors / functions of the DSP itself, its customers and its service providers, turning the current ‘passive’ distribution utilities into ‘active’ market facilitators and system coordinators.

Navigant sets out a very clear vision for a DSO – as an orchestrator of the distribution area – but its functions are much more similar to a DSP than to a traditional distribution system operator (DSO), and described above. Navigant’s DSO paper is less explicit about the type of regulation it expects for such a function but it is extremely clear about the coordination of market facilitation, balancing and network operation.

Please see Figure 1 below for a summary of the differences between a DSP and a DSP. Also, IGov held a workshop on DSO v DSPs, and the discussion and presentations can be viewed here. 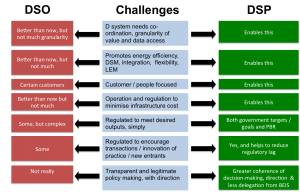 A separate or combined wires and system operator function?

The DSP can be either be a combined energy and system services (wires and local system) operator and balancer, market facilitator and coordinator, and provider of last resort or the wires and system operation (+ balancing / market facilitator / provider of last resort) can be separated out. The argument for the latter is that if a DNO is transformed into a joint system operator and wires DSP, then they might continue with DNO- type ‘think’ and continue to use increased infrastructure for operational solutions whereas if they were a SO only type company then they might be more open to a more appropriate non-wires option.

There is however various downsides in doing this right at the start of the transition from DNO to DSP.

The New York State example is where the distribution utilities retains both wires and system operator functions together, and have a public service obligation placed on them. The public service commission, the NYS regulator, is developing an innovative 3 prong approach to regulation. The utility would get revenue from traditional cost of service; from earning adjustment mechanisms (EAMs) with respect to meeting certain indicators linked to public policy objectives; and with respect to encouraging transactive energy. Two of these revenue streams are based on performance based regulation. The Navigant report also sees the wires and system operator function together.

We don’t really know how a DSP will work out: whether it is better as a combined operation and wires activity, or separate. However, it seems to us to be much more sensible to allow technologies, platforms, ways of doing things to develop as a coordinated combined operation and wires DSP. If things don’t work out, or if it becomes clear that separation is needed, change can then occur – with the DSP having ‘learnt’ about the data flows. It seems to us, better to be cautious in this instance.

The NY REV has argued for a new value proposition, or ‘heart’ of the newly envisioned NYS energy system – a distributed system provider (DSP) (see Figure 2 below). The idea of the NYS DSP is transformational in the sense that it is a new function which is intended to coordinate system operation and markets (which are providing the services that customers want) within their areas, whilst at the same time working towards meeting State policy goals – which includes reducing costs of infrastructure. 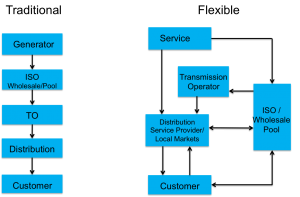 The NY DSP is envisaged as the combined energy and system services, wires, local system operator and balancer, market facilitator and coordinator, and provider of last resort. It is the coordinating platform which brings together third-party providers of DER (which may also have their own platforms) which would sell their services (of all types) to customers (of all types) via new markets / platforms to create value for both customers and the system. Both providers of service, and buyers of them can choose to sell / buy locally (i.e. via a platform or through the DSP) or at the wholesale level. The DSP is to serve as a multi-way retail-level dispatcher to the grid (distribution and transmission) of both energy and system services, supplied not only by traditional power plants, but also by an expanded fleet of DER (defined as including end-use energy efficiency, demand response, distributed storage, and distributed generation).

The DSP should be the institution which understands the value of DER in their area. On the whole, the NY DSPs are expected to be facilitators and coordinators. If they want new services in their areas, then they should provide incentives, contracts or stimulate tariffs (and necessary data and analysis) to enable a third party to provide it. If customers want a service, then they would either buy that under a ‘normal’ market situation or they should approach the DSP to develop a market or a new means of providing the service. In this situation, capacity markets are unnecessary.

In principle, the DSP would be incentivized sufficiently so that it wants to enable these transactions (or non-wire alternatives) rather than add their own assets. The idea of the DSP is that the utility is to be regulated in a ‘new’ way so that it incentivizes new behaviors of the DSP itself, its customers and its service providers, thereby turning the current ‘passive’ distribution utilities into ‘active’ market facilitators and system coordinators. The first details of this are set out in the NY PSC Ratemaking Order. As explained in Blog 2, Utility revenue becomes primarily performance based and related to meeting desired outputs. This revenue in NYS comes from three main sources (two of them new): traditional cost of service, EAMs (which help meet State goals); and PSRs (from transactions) (please see the second blog in the series). For more details of EAMs please see an intro here, and a powerpoint presentation of the Ratemaking Order here.

There is a great deal of difference between a DSO or DSP function.

The traditional DSO version seems to us to be a very minimal step on from the current DNO function.

NYS has been central in creating the debate about the constituents of a future energy system, and the roles of current and future stakeholders. A DSP (whether NYS or that envisioned by IGov) is a new institution with a new role intended to be fit for purpose to meet the challenges of operating an energy system in a rapidly changing world.

The traditional DSO is very much business as usual – whereas the DSO described by Navigant is similar to the NYS DSP.

It is the function which matters – and we strongly argue that the DSP or the Navigant DSO is the way that GB utilities should develop – but it would be great if we can agree on a name so that confusion can be reduced.