Comparing NYS with CA: Blog 5 – A CA and NYS similarity: mapping DER via a regulated process

Comparing NYS with CA: Blog 5 – A CA and NYS similarity: mapping DER via a regulated process

Flexibility is the key to a rapid, cost effective transformation to a sustainable, secure and affordable energy system.

An essential step in transforming to a sustainable, secure and affordable energy system is to encourage a flexible, integrated and coordinated (across electricity, heat and electric vehicles) energy system operation. This requires building (and valuing) distributed energy resources (DER, for both supply and demand). And to do this cost effectively, it is essential to know what the DER resource base is of an area. Only when this is known is it possible to value that DER; and only when DER value is known, is it possible to understand the emerging economics of D4 (the move towards decentralisation, decarbonisation, digitalisation and democratisation). The amount of DER in an area, and the degree to which it is incorporated into system operation has major implications for how networks are charged for; how they are regulated; the type of tariffs which should complement a DER system, and so on.

Given the centrality of flexibility and DER to energy system transformation, both CA and NYS have instituted a regulated process to reveal their DER resource and value. In both cases, they have required distribution utilities to undertake distribution resource plans, and have given them a couple of years to complete them. In CA, this is called a distribution resource plan (DRP) and in NYS it is called a distribution system implementation plan (DSIP). The process of developing them opens up access to data; it involves all interested stakeholders; it provides a space where stakeholders, which might not otherwise have thought much about DER, are forced to connect to some degree to DER possibilities.

It seems to IGov that the GB Regulator should require the GB utilities to undertake a similar, regulated process for their areas for two important reasons:

The DRP / DSIPs are therefore essential building block for both the successfully functioning of the new, potentially transformational, institutions – distribution service providers – , and to enable a flexible energy system.

As set out in the third blog and below, CA energy policy (arguably) has five key pillars. This blog focuses on their ‘decarbonisation by building distributed energy resources’ pillar.

The CPUC Scoping Note of 2014 set up Distribution Resource Plan (DRP) proceedings (the equivalent of the 2015 NYS Distribution System Implementation Plans) whereby CA Investor Owned Utilities (IOU) are required to produce a DRP (see here). The Scoping Note argued that the underlying rationale for promoting increased deployment of DERs is that they have a critical role in meeting CA’s GHG reduction policy. The goals of the DRP Plans were to:

The intent of the Scoping Note was very little different in terms of outcomes from that set out in the 2014 Vision Paper of the New York Reforming the Energy Vision (see here and here), and discussed below. Moreover, the DRPs were also to be aligned with More Than Smart, a progressive initiative which paints a much more integrated and market based future, and puts forward ideas about how to get there.

The DRPs have been followed up with the November 2016 CPUC DER Action Plan, which has five Actions to be undertaken in 2017; three in 2018 and one in 2019. At root, the DER Action Plan process should work out:

Two 2017 Action Plan actions (see here) was to set up two demonstration projects to help work out the value of DER (see here): This is the Integration Capacity Analysis (ICA) proceedings (known as Demonstration Project A) and the Locational Net Benefit Analysis (LNBA) known as Demonstration Project B). These are both to be finished by 2018, and should provide a better understanding of the value of DER to the CA system. Two of the 2018 Actions are to then execute the Project A and B results.

One pivotal area of the 2014 NY REV/ 2015 Vision Order (see blog 2), expanded on by the 2015 MDPT, was that of the role of distributed system providers (DSPs). The current distribution utilities within NYS are expected to transform to DSPs – essentially distribution energy and system service market facilitators and coordinators – who would also be responsible for the public service obligation (PSO). The MDPT report set out the argument behind why utilities need to understand their area distribution energy resources (DER) in detail; a requirement for them to produce a distribution system implementation plan (DSIP); and an explanation of what a DSIP should consist of, how to write one, and how long it would take (about 2 years). The writing of the DSIPs is the process which essentially forces the utility, and other stakeholders (i.e. providers of resource, customers, new entrants, the utility itself), to understand at the most detailed level what the implications are for all stakeholders of being in a regulatory environment which is transforming the distribution utility environment into a DSP environment. Having understood the DER resource in an area, the DSIP was to provide confidence to the wider community that DSPs would, over (broadly) a 10 year period, develop into:

The 2015 Market Design and Platform Technology Report also kicked off various Working Groups to work out various technical and economic issues of the NY REV. Please see the NY REV website for details. These Working Groups are now beginning to be published (e.g. see here).

NYS has moved one step further than California in valuing DER. This is mainly because NYS is envisaging the development of DER market activity. One important aspect of that is not just working out what DER they have, but also valuing it. In mid-November 2016, the staff proposal for methodology for valuation of DER in NYS (VDER) was published. The VDER 4 basic components, as shown in Figure 1 below, and known as the value stack, are:

In March 2017, the PSC value of DER Order was published with three dockets from the PSC: (1) an introduction to the Value of Distributed Energy Resources (here), (2) Distributed System Implementation Plans (here), and (3) the Interconnection Earnings Adjustment Mechanisms (here). All of these Orders are more detailed workings of previous more generally stated agreements, and will be central to how different entities, including distribution utilities, can make money. This second docket, with respect to DSIPs, was to place more pressure on the utilities to fulfil them. 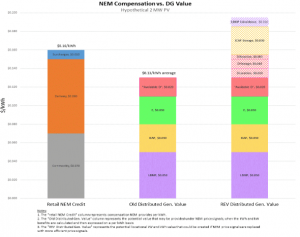 DRPs and DSIPs as a fundamental first step towards a flexible energy system, and a transformation distribution system / service provider

There are many competing names for distribution market facilitator (and a review and explanation of their functions is provided in the sixth blog in this series). Whatever their name, the basis of a successful distribution market facilitating function is knowledge about the DER in the local area, and its value at different times of the day. The DRP / DSIPs are the essential building block for both (1) the successfully functioning of these new, potentially transformational, institutions (ie the DSPs), and (2) to enable a flexible energy system.

Undertaking a regulated, transparent, distributed energy resource plan (DRP) or DSIP to a known timeline is a fundamental requirement of the move to a cost-effective, flexible energy system. IGov considers these plans to be potentially transformational, and would argue that all electricity systems would benefit from in-depth studies of their DER potential and value. Certainly, IGov argues that Ofgem should require similar plans to be undertaken via the regulated process in GB.