Environmental Fate of Nanoparticles and Toxicity

Nanoparticles are increasingly used in our society notably silver, zinc oxide, ceria and gold an increasing long list. Applications are seen in medicine such as gold for arthritic joints and the antibacterial properties of silver in medical dressings. The environmental fate of nanoparticles and how they enter the food chain both for lower organisms and then ultimate humans is obviously a considerable concern. The physic-chemical properties control the dispersion of these particles in water and other media and their access to other parts of the body. This project in collaboration with the OECD PROSPECT project is studying the physical properties of the particles and how they control the environmental fate.

The project is investigating the physical properties that affect the fate of nanoparticles in the environment concentrating on two materials ZnO and CeO2:

Each of these fundamental properties is being considered for both materials firstly from the need to understand what is happening fundamentally and then secondly to assist in the design and understanding of organism-level toxicity testing.

ZnO is produced by many companies but the OECD study is concentrating on z-Cote from BASF and Nanosun. The ZnO surface is negatively charged as a simple measurement of extinction plot as a function of bulk pH and charged interface analysis shows that the surface –OH groups have a pKa of 6.7. It is this charged surface structure that is responsible for the stability of dispersions in water. The stability of the dispersions is a complex balance of surface charge, aggregation kinetics and dissolution but variation. That said an empirical half-life can be determined for all media with varying ionic strength: the half-life varies from pure water to the ionic strength of the dead sea is very short around 45 minutes. These simple tests indicate that ZnO nanoparticles will fall quickly into the sediment from where they will enter the food chain.

The project continues to investigate the effect of medium on the stability of the medium and the rate of dissolution. The role of any surface ligand is also being considered. We are also extending the studies to look at CeO2 nanoparticles which are positively charged and have complementary stabilisation mechanisms.

The toxicity of nanoparticle particles is also dependent on the nano-properties such as shape and size but for ZnO an interesting property is the ability to generate photo-electrons and induce photo-radical stress. Alternatively, CeO2¬ is a powerful redox centre with two oxidation states of Ce3+ and Ce4+ present on the surface of the particle. It is this property that confers enhanced oxidation/reduction activity in diesel combustion which is why ceria is used as an additive. However, redox stress in organisms is toxic to their metabolism, superoxide being a particularly dangerous radical.

The project is considering all physical-chemical properties and interacts with the projects on the interactions of Bacteria with nanoparticles providing a comparative whole-organism assay. 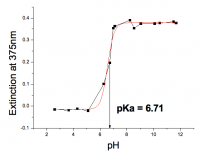 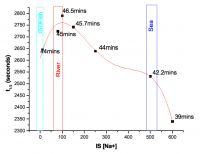